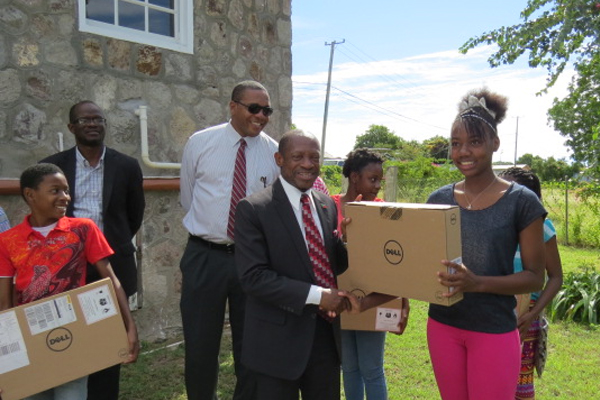 PM Douglas says students in Nevis must enjoy same opportunities as those in St. Kitts; warns against getting involve in crime

Basseterre, St. Kitts (CUOPM) — Declaring that students from Nevis must have the same opportunities as those in St. Kitts, the Federation’s Prime Minister the Rt. Hon. Dr. Denzil L. Douglas joined Federal Ministers, the Hon. Patrice Nisbett and the Hon. Glenn Phillip in distributing laptops to first formers of the Charlestown Secondary School and the Gingerland Secondary School.

“I want to emphasize that! We are one nation. We are one country. We happen to be living on two separate islands, but we are one nation, one country and one people,” Prime Minister Douglas told the Charlestown Secondary School students and parents during a ceremony on the grounds of the Federal Office on Government Road.

“And when your Nevis Island Administration is not able at this time, for whatever reason to present these laptops to you, we definitely will make it possible for the sister island of Nevis. We are the Federal Government of St. Kitts and Nevis and so I want you to always understand that,” said the Prime Minister, who also spoke to first formers of the Gingerland Secondary School on the grounds of the Gingerland Police Station.

“Whatever privileges the children or the people of St. Kitts may enjoy and have, those same privileges must be enjoyed by the people of Nevis,” said Dr. Douglas, who thanked the Honourable Patrice Nisbett.

“I say all that, because that is why he is here. He is here because he is part of the Federal Government and this is a Federal project, providing laptops to all of our first formers in all of our high schools in St. Kitts and in Nevis and so I really thank him for being here,” said Dr. Douglas, who also expressed thanks to the Minister of Information Technology, the Hon. Glenn Phillip, Mr. Morton of the Federal Ministry of Education and teachers of high schools who were present.

Expressing thanks to the Superintendent of Police Mr. David Brandy for the fantastic job he and the other ranks of the Nevis Division of the Royal St. Christopher and Nevis Police Force are doing, Prime Minister Douglas used the opportunity to express concern about the level of criminal activity in both St. Kitts and in Nevis.

“We are asking you our children who are in school to make sure that you make the best of opportunities to obtain an education. We do not want you to fall into any life of crime. We believe that there is so much that you can do with your lives than falling to criminal activity. We want to work with you to make sure that you do your best. The laptop computers are to assist you. They are tools to be used in your educational advancement and to prepare you for a better life,” Prime Minister Douglas said.

“Again I emphasize in closing that the Federal Government is here to work closely with the people of Nevis. We want to work with the Nevis Island Administration, no matter which party is in power here. We want to work closely with the Nevis Island Administration to ensure that the benefits of our country come to all of the people of St. Kitts and Nevis,” Dr. Douglas concluded.