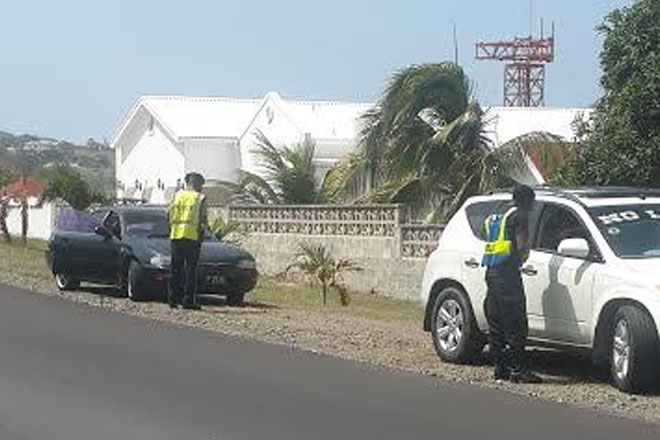 PM Harris: A Crime Fighting Plan with a Difference…Team Work…Results

Basseterre, St. Kitts — A new crime fighting plan put forward by the High Command of the Royal St. Christopher and Nevis Police Force has been approved by the Cabinet of St. Kitts and Nevis. That decision was announced on Wednesday (July 15th) by Prime Minister and Minister of National Security, Dr. the Hon. Timothy Harris, during his monthly press conference at Government Headquarters.

“The Cabinet accepts that the safety and security of our residents, our business people, our visitors, our citizens, is one of the foremost responsibility of the government and we will work every day, very hard to ensure that we create a safe and secure place for all of us”, said the Prime Minister. In an impassioned presentation he addressed the context and imperative of the new proposal and gave a “pledge that we will not allow those who choose to live a life of crime to destabilise, tarnish and disrupt the normal peaceful living of persons in our beautiful federation”.

Dr. Harris revealed that over the last few months there have been successful public safety initiatives by the security forces designed to address a number of concerns. “I am pleased to report that for another month the overall picture with respect to crime and major crimes is that they are down saves for homicides and gun related incidents. Indeed we have had a 33 percent reduction in major crimes in St. Kitts and Nevis from January to June of this year compared to the same period last year”.

Included among the category of major crimes are murder, break-in, larceny, robbery, wounding, malicious damage, arson, firearm and drugs. Prime Minister Harris commended the police for the overall results in terms of the reduction in major crimes, but said there is still much work to be done in reversing the upward trend in murder and firearm related crimes. “Between the period 2013 and 2015 major crimes have fallen 55.3 percent. Whatever our view, these are the hard facts and I want therefore to offer commendation to the Acting Commissioner of Police and his High Command, to those in the Defence Force and all those who have been cooperating in the fight against crime”, he said.

Dr. Harris reported that on Monday (July 13th, 2015) the police six-point “action plan to reduce homicides and violent crime in the federation” was approved by Cabinet. He said what the police brought to Cabinet, and successfully defended, was a six-prong comprehensive “action plan to reduce homicides and violent crime in the federation” of St. Kitts and Nevis. The Prime Minister said the plan was an “important document” that was focused on accountability, performance and results. “On page 3, they gave us a framework for accountability…what they will strive to do…performance goals…results are what we are about for the people of the country.” He emphasised that his administration will not be distracted by any talk, anytime, anywhere that is not focused on achieving positive results (for the benefit of the people) in the fight against crime. “Some want to get us confused about talk…about ranks and position…we are concerned about results in law enforcement”.

Dr. Harris said the people of the country want renewed confidence in the security forces and that confidence will come only through results achieved by a (new) team approach. “Results…produce them for the citizens…give us renewed confidence…that is what we want. And to get it…no one-man show…team work in the police and team work in the fight to redeem our land”, he emphasised. He said the security forces were now working closer together resulting in an increase in the number of joint operations that involve Customs, Police and the Defence Force.

The Prime Minister said the six elements of the plan, Prevention; Intelligence-led Policing; Targeted Operations; Collaboration with other Agencies; Engagement of Stakeholders and; Continuous Improvement & Administration, are coordinated to achieve a “singular result…making St. Kitts and Nevis a safer place”.