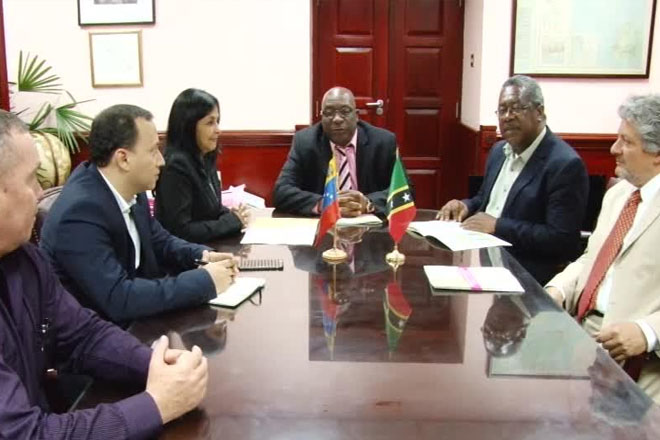 (ZIZ News) — Prime Minister, the Hon. Dr. Timothy Harris reaffirmed the government’s commitment to and solidarity with the Bolivarian Republic of Venezuela, when he met with members of a Venezuelan delegation at Government Headquarters on Saturday.

The delegation, led by Minister of Foreign Affairs, Delcy Rodríguez, engaged the Prime Minister in high level discussions on a wide range of topics including the ongoing maritime dispute between Venezuela and Guyana.

During the meeting, Prime Minister Harris pledged the government’s support to assist in any way possible to see an amicable end to the dispute.

“I have pledged the commitment of St. Kitts and Nevis to work with Venezuela and to work with member states in CARICOM in bringing a resolution to what has been a very difficult development in the relation between Guyana and Venezuela and to say that we value always the outstanding good relations; excellent relations in fact that has developed between Venezuela, the Government and people there and the Government and people of St. Kitts and Nevis,” he said.

Dr. Harris also used the opportunity to commend the work of former Venezuelan President Hugo Chavez in establishing close ties between both nations.

“That relationship took on a very important new level of engagement as a result of the foreign policy of President Chavez and then his successor in President Maduro and we will want that cooperation to continue. We will work hard within CARICOM and to ensure that a resolution can be brought to this dispute and to ensure Venezuela of our ongoing solidarity and cooperation,” he said.

The meeting was also attended by Attorney General, the Hon. Vincent Byron and Venezuela’s Ambassador to St. Kitts and Nevis, His Excellency Romolo Camilo Henriquez Gonzalez.