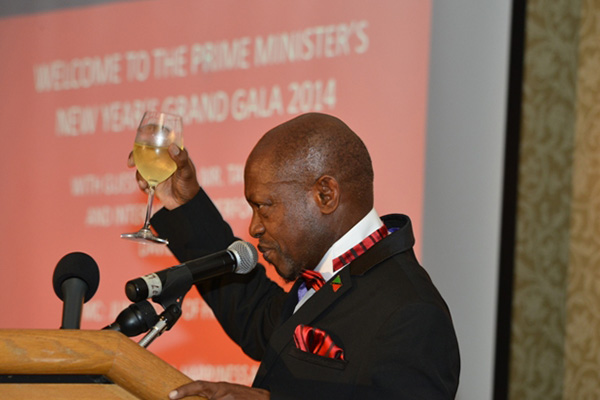 PM tells over 750 patrons “my Government is better and stronger and ready to move St. Kitts and Nevis forward”

Basseterre, St. Kitts (CUOPM) – St. Kitts and Nevis’ Prime Minister, the Right Hon. Dr. Denzil L. Douglas said last Sunday that the people of St. Kitts and Nevis must give God tremendous and bountiful thanks for the successes in 2013, despite the challenges.

“As the year 2013 recedes into history and as we look forward into 2014, we are forced to reflect on how much we have accomplished, on how much we have achieved; how we have been able to turn challenges into opportunities because we have kept our eyes focused on the ball and so tonight we give God tremendous and bountiful thanks for what we have been through one year ago considering there was mutiny in the camp,” Prime Minister Douglas told over 750 patrons at his Annual Prime Minister’s New Year’s Gala at the St. Kitts Marriott Resort.

Dr. Douglas pointed out that today, his St. Kitts-Nevis Labour Party Administration is “stronger, bigger and better as a government and ready to move this country forward into a brighter future for one and for all.”

He used the occasion to thank the nationals and citizens of St. Kitts and Nevis who believe in his Party as a Government.

“I want to thank in particular the public servants led by a hard-working and committed Cabinet of Ministers, who in 2013, recognised the challenges that we faced. All the challenges thrown at us from the global community and those from the region and those of course from home,” said Dr. Douglas.

“We want to move our country forward and upward. We have committed to ensure that this first sustainable island state will be powered by a green economy. We want to thank the Public and Private Sectors, those in the business community, those in the NGO’s, those in particular our hoteliers, the investors who continue to pour their investment dollars into this country because of the full confidence that they have in the St. Kitts and Nevis Labour Government,” said Prime Minister Douglas, who expressed a burning desire to continue to move St. Kitts and Nevis forward.

“We cannot do it alone, but we can do it together and so I ask you to remember those who are here with us in particular, but also those who are abroad, wherever they are, as we would raise a toast to St. Kitts and Nevis of the present and of the future so that it would be a brighter country for one and for all,” said Prime Minister Douglas..

He used the opportunity to thank each of the Cabinet ministers as well as the members of the hardworking GALA Committee led by the Hon. Marcella Liburd.

The Gala 2014 was chaired by veteran broadcaster Clement “Juni” Liburd.