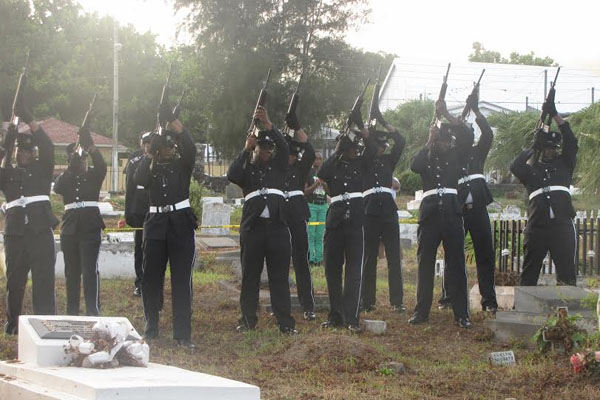 Basseterre, St. Kitts (SKNIS) — Sergeant Shorna Edwards has achieved many milestones during her 21 year career in the Royal St. Christopher and Nevis Police Force (RSCNPF) and that continued in early October during the funeral for WPC Avis Cannonier.

Sergeant Edwards became the first woman to lead a firing party, a distinction noted by Inspector Eldrin Dickenson as a “historic” event which highlights the “progressive nature of the force.”

“It felt really good,” Edwards stated, while commenting on her experience. “I was a little nervous but once the first set of commands was given it was smooth sailing. I feel very happy that persons saw the potential in me and gave me the opportunity to do good for my force.”

That potential earned Sgt. Edwards the distinction of being the first Regional Security System (RSS) female instructor when she facilitated regional Basic and Leaders Courses. Back home, she also was one of the few female Sergeant-at-Arms during a sitting of the Federal Parliament and had the honour of being the officer in charge of the female platoon for the 2010 Independence Ceremonial Parade.

“Making history is a big part of who I am and I’m proud of my accomplishments to date,” she stressed. The police sergeant said there are many benefits for members of the RSCNPF and encouraged more women to consider a career in law enforcement.

“There are opportunities for females in the police force but they have to be committed, focussed and hard-working as much as their male counterparts,” Edwards emphasized. She concluded by crediting Commissioner Celvin G. Walwyn and the High Command of the agency for ensuring the upward mobility of deserving officers.