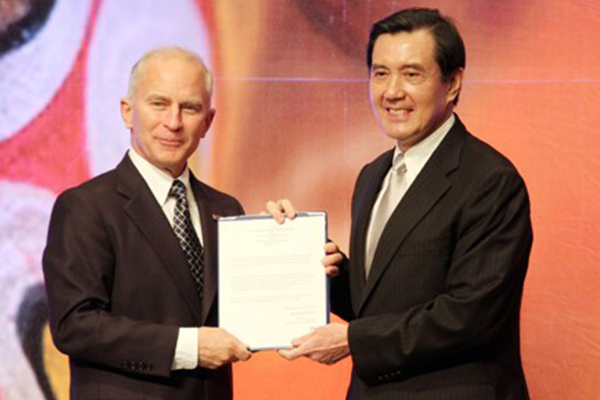 ROC President Ma Ying-jeou was awarded the Eisenhower Medallion Sept. 19 by U.S.-based People to People International for his efforts in promoting regional peace.

“My acceptance of this award in my capacity as president of the ROC represents affirmation of our people’s commitment to the pursuit of peace,” Ma said at a ceremony at PTPI’s Worldwide Conference in southern Taiwan’s Tainan City.

“I will continue to work hard with my compatriots to uphold regional peace and stability,” he added. “I also look forward to people around the world being able to feel the compassion and concern of the people of Taiwan through our humanitarian aid work.”

PTPI Chairman Micah Kubic said the honor came for Ma’s “efforts to further cross-cultural communications, for his extraordinary leadership, and for exceptional contributions to world peace and understanding.”

PTPI presented Ma the medallion primarily in recognition of his East China Sea Peace Initiative, proposed in August 2012. The initiative calls on all parties in disputes over the Diaoyutai Islands to refrain from antagonistic actions, shelve controversies and not abandon dialogue, observe international law and resolve disputes through peaceful means, seek consensus on a regional code of conduct, and establish a mechanism for the joint exploration and development of resources.

U.S. Assistant Secretary of State for East Asian and Pacific Affairs Daniel Russel lauded the initiative during February congressional hearings in Washington. In June at the Shangri-La Dialogue in Singapore, U.S. Secretary of Defense Chuck Hagel and Australian Minister for Defence David Johnston praised Taiwan for peacefully settling fisheries disputes with Japan and the Philippines.

The president noted in his address that the inking of the Taiwan-Japan fisheries agreement and peaceful resolution of the fatal Guang Da Xing No. 28 shooting incident with the Philippines show that as long as parties are willing to engage in dialogue, peace is achievable.

“Peace is a commitment,” Ma said. “To achieve and maintain it takes courage and determination.” He added that the ROC is committed to doing everything in its power to preserve peace in the Asia-Pacific.

Ma is the first ROC president and second ROC national to win the honor after Dharma Master Cheng Yen, founder of the Buddhist Compassion Relief Tzu Chi Foundation, in 1994. Past recipients include Nelson Mandela, Lech Walesa, Mother Teresa, Jimmy Carter, Ronald Reagan, Luciano Pavarotti, and nongovernmental organizations such as Doctors without Borders and Save the Children.