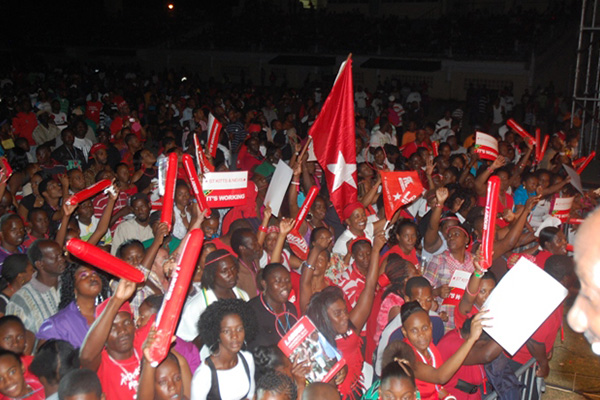 Basseterre, St. Kitts, (CUOPM) — Prime Minister the Right Hon. Dr. Denzil L. Douglas says he remains committed to improving the lives of the people of St. Kitts and Nevis as his Labour Administration continues to develop the country.

During his weekly radio programme “Ask the Prime Minister” on Tuesday, and in response to a caller, the St. Kitts and Nevis leader said the negatives permeating from some talk shows will not detract from the mission of service to the people.

“There is so much hate, so much negative, you listen to (Ian) Patches (Liburd) radio programme. Its hatred, negative, bloodletting, violence, shoot, kill, that’s what you are hearing. It’s  the same thing on Michael Powell’s show, violence, hate, viciousness, etc. This caller has really inspired me this morning because I know really I am not doing the work only for man, I think what I am doing has to be inspired by God,” said Prime Minister.

It has to meet the basic tenets and the values with which society has been given to operate with. And I do not do it for myself, I do it because people have elected me to serve and that is why I say that I am not distracted at all. I have a focused job to carry on and this strength and the vibrancy of the leadership that I provide, as long as I have strength and as long I have the support of majority of the people, who could stop me,” said Dr. Douglas, who thanked the many thousands “who would meet me in the streets, who would hug me, kiss me, pray for me, those who whisper in my ears, ‘don’t worry, there is more for you than those against you’ and that inspires me.”

Dr. Douglas said he has a job that he will continue to do it.

He recalled how he was approached by then St. Kitts-Nevis Labour Party Leader, His Excellency Sir Lee Llewellyn Moore, to be the Labour Party’s candidate.

“My party believed that I had the courage and the fortitude to do it. Mr. Moore, Sir Lee Llewellyn Moore, endorsed me… and came to my office (Medical practice) there on College Street back in 1987 and asked me to be a candidate for the Labour Party for Constituency #6. Today, you hear all kinds of nonsense that I pushed Mr. Moore out of office. Can anybody push Mr. Moore out of office? Absolute nonsense! People who sat with Mr. Moore and who are desecrating his memory today, chatting lies and foolishness on the radio; those who even had closer relationship than I, would ever have with him, are desecrating his memory and chatting all kinds of nonsense, full of lies for political prostitution,” said the Prime Minister.

Labelling it political prostitution, he said PAM has now given them a ‘mess of pottage” in order for them to support PAM.

“I understand on the platform on Friday night one of them said ‘Douglas is a PAM.’ I wonder if Condor know what he is? Condor I ask you publicly, do you know what you are? Do you know where you are?  Are you in the middle of the street? Are you on the sidewalk? Are you in the drain? Where are you? Stand up and say where you are! It is disgraceful to hear these things coming from my former colleagues,” said Dr. Douglas.