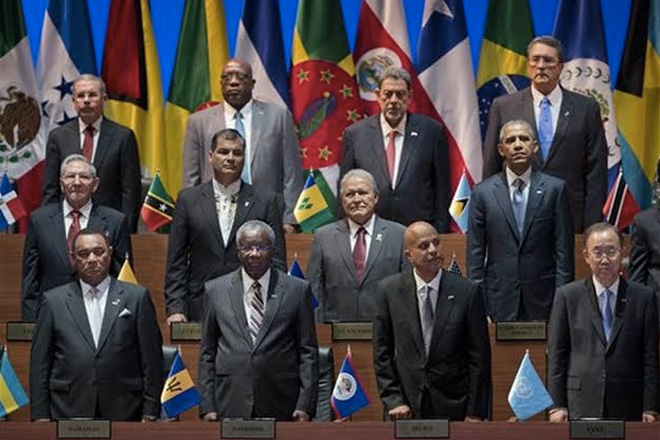 Friday, April 10, 2015 marked an historic day in the Summit of the Americas when, for the first time, a US President and a Cuban President shook hands and sat down to discuss matters of common interest to the nations of the Western Hemisphere.

St. Kitts and Nevis Prime Minister, Dr. the Hon. Timothy Harris said he was, “delighted to be there to witness US President Barack Obama and Cuban President Raul Castro greet each other and clasp hands, signifying a warming of the relationship and mutual understanding that the pathway to prosperity for the people of the hemisphere, must involve all of us and that peace was an imperative for shared prosperity.”

The Seventh Summit of the Americas being held in Panama City, Panama, marks the first time all 35 members of the Organization of American States have been represented. “Cuba has always been denied access and so we are happy that there has been a recalibration of the relationship at the hemispheric level and that this exchange [between the two leaders] expresses, in an official way, the further thawing of the antagonistic relations that hitherto existed,” PM Harris said.

In speaking to the process of moving forward, Prime Minister Harris said, “Caricom leaders have long advocated for normalcy to be restored to the relationship between Cuba and the United States of America, two allies of St. Kitts and Nevis. That position has now been vindicated. And whilst this is a fresh start, we are aware that there is still substantive work to be done at the government to government level, before normalcy is achieved. For example, ongoing dialogue on the matters of the blacklisting of Cuba as a state sponsor of terrorism and the economic blockade that was imposed in the aftermath of the Cuban revolution.”

Prime Minister Harris and other members of his delegation leave Panama today for New York City. Whilst there, the Prime Minister will hold a luncheon meeting with staff of the St. Kitts and Nevis Mission and attend a thanks giving service put on by nationals.