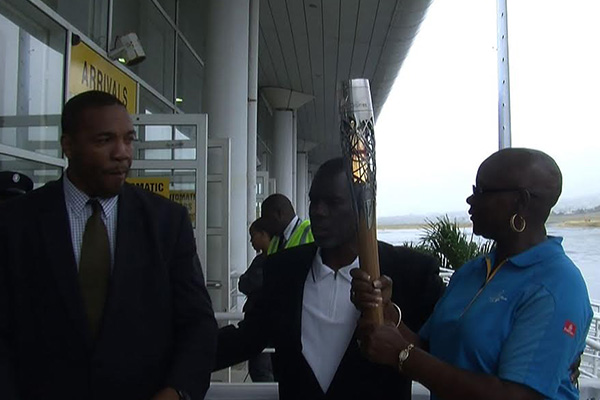 (ZIZ)– This weekend St. Kitts Nevis will be in the international spotlight as BBC reporters and other international media houses are on island for the arrival of the Commonwealth Games Queen’s Baton.

Sports officials and other dignitaries were at the Robert L Bradshaw International Airport this evening for a welcome ceremony.

Among the speakers were Minister of Sport, The Hon. Glenn Phillip, and President of the National Olympic Committee Alphonso Bridgewater.

State scholar and winner of a Remarkable Teen award for 2013, Tama Martin was also chosen to greet the Queen’s Baton Relay officials upon their arrival.

After the ceremony a motorcade travelled through Basseterre followed by a cocktail reception at the Ocean Terrace Inn.

A ceremony is also planned for Friday outside Government Headquarters where Prime Minister, the Right Hon Dr Denzil Douglas will accept the baton.

The baton will arrive in Nevis on Saturday 29th March.

There will be a reception/ welcoming ceremony at the waterfront in Charlestown. The baton will then be taken around the island by various individuals.

Some of the people being asked to assist, especially with the final leg of the relay, are athletes, students and political figures from across the nation.