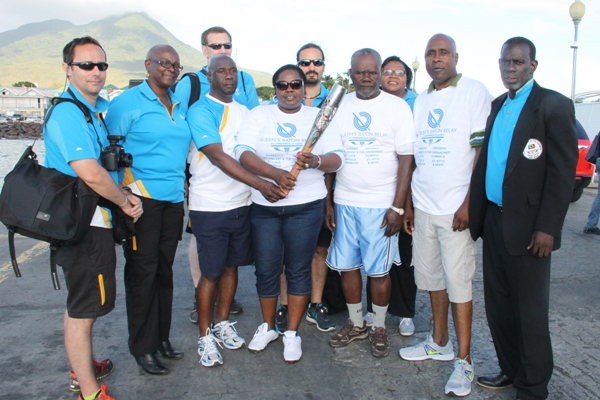 NIA Charlestown Nevis -– The Queen’s Baton Relay made its way around the island of Nevis on March 29, 2014, as a part of the build up to the 2014 Commonwealth Games slated to be held in Glasgow Scotland between July 23 and August 3, 2014.

Every four years athletes of the countries that make up the Commonwealth come together to compete in the Commonwealth Games. Prior to the official opening of the games, the Queen’s Baton travels to all the participating countries. Premier of Nevis Hon. Vance Amory, while receiving the Baton at the apron of his office in Bath Plain, regarded the relay as a wonderful idea which united the Commonwealth of Nations.

“To have this relay here in Nevis as part of the journey to Scotland tells us that we are part of a link in a very important chain of Commonwealth people, all of us having for a time been part of the British Commonwealth.

“I think it should be some part of an inspiration to our young people so they can aspire to be international athletes representing their country and maybe next year, some of them who have seen this would be aspiring to international involvement in sports,” he said.

Nevis’ Deputy Premier and Minister of Tourism Hon. Mark Brantley also received the Queen’s Baton at the Botanical Gardens where he encouraged the members of the Commonwealth and others viewing coverage of the event to visit the island.

“I think that this is a very important event. It demonstrates, of course, St. Kitts and Nevis and our commitment to the Commonwealth and we look forward to our athletes performing well at the Commonwealth Games in Glasgow later this year.

“We trust and hope that for all who might be listening and watching that you will chose to visit Nevis. It’s a beautiful place and I am sure from the pictures and experience that you have here, you will want to come back and spend some time with us. So thank you all very much for putting Nevis on the map and as one of your stops and we look forward certainly to continue to work very closely with the Commonwealth of Nations,” he said.

The Queen’s Baton Relay included stops at resorts and hotels on the island as well as visits to Nevis’ historical sites including, Hamilton House, the Nevisian Heritage Village and the Bath Hotel. The baton also made a stop at the Newcastle Pottery where the representatives for the Queen’s Baton Relay were presented with a clay replica of the baton.

Hon. Alexis Jeffers and Hon. Hazel Brandy-Williams along with Cabinet Secretary Steadmond Tross and President of the Nevis Island Assembly Farrell Smithen participated in the final leg of the relay, carrying the baton through Charlestown to the Charlestown Pier.