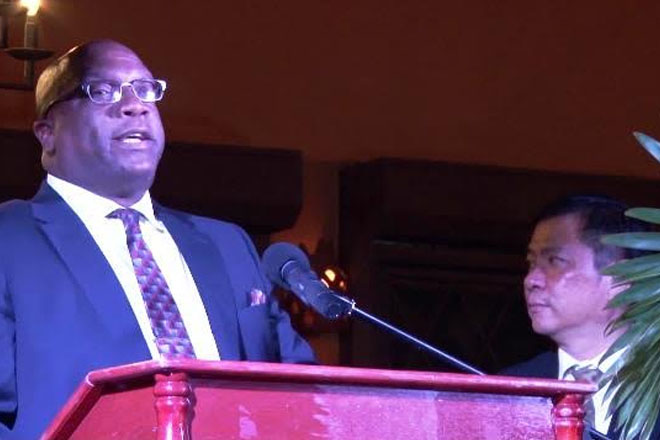 (ZIZ News) — St. Kitts and Nevis’ ally, the Republic of China (Taiwan) took the celebration of its 104th anniversary to the Palm’s Court Gardens on Friday.

Coupled with the ROC’s anniversary celebrations, was the 32nd anniversary of the establishment of diplomatic relations between ROC Taiwan and St. Kitts and Nevis.

Resident Ambassador, His Excellency George Gow Wei Chiou, in the national address, mentioned many significant projects undertaken in the Federation. He said such undertakings are necessary for human resource enhancement.

“In the past 32 years, there are dozens of cooperative projects which have been conducted between Taiwan and St. Kitts and Nevis. They cover from agriculture to social development, from education to recreation, from medical equipment to computer and laptop, from ICT Center to solar power farm and not to mention the Kim Collins Stadium and Eco Park,” he explained.

“The purposes of all of these cooperative projects are to enhance human resource empowerment and increase the welfare of kittitians and Nevisians,” he added.

Prime Minister, the Hon. Dr. Timothy Harris, in congratulating the people of Taiwan on their anniversary, expressed gratitude for the continued investment in the Federation.

There was a special toast after the speeches.

October 10th is the official National Day of the ROC.

In 1983, on September 23, a mere four days after St. Kitts and Nevis’ Independence, the Republic of China (Taiwan) established diplomatic relations with the newly independent nation, making it the first country to do so.