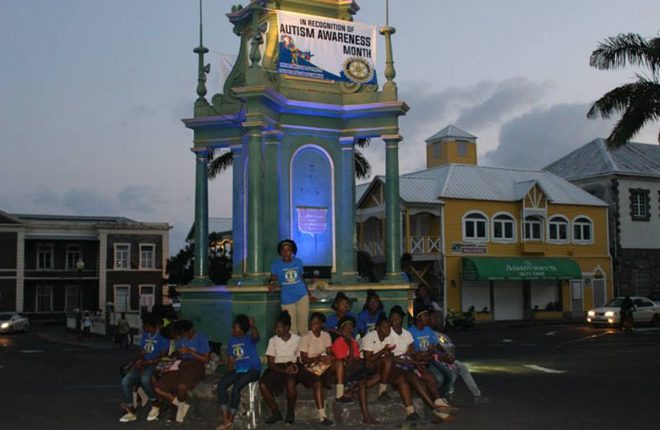 (ZIZ News) — The Rotary Clubs of St. Kitts and Liamuiga continued activities to promote autism awareness with a Lighting Ceremony at The Circus on Thursday evening.

April was internationally recognised as World Autism Month and the local rotary clubs planned several events in its commemoration. Among them was the illumination, with blue lights, of the Berkeley Memorial at The Circus.

In explaining the significance of the event, President of the Rotary Club of Liamuiga, Dr. Marcus said, “There is a major campaign around the world where different landmarks are lit up blue in recognition of autism and we thought that we should bring to St. Kitts. For example, the Eiffel Tower in Parris, the Empire State Building and even the pyramids of Giza in Egypt are lit up this year. So we want to start this tradition and see if we can do this each and every year.”

He said autism is not a well known disorder in the Federation so raising awareness about it is crucial.

“We often look at young persons and we say they are slow, hard-headed, or they don’t want to learn, we don’t really recognise that they may be autistic or have some other development challenges. So we are happy at the Rotary Club of Liamuiga to partner with our fellow Rotarians in the Rotary Club of St. Kitts and also other inter-actors and also the Rotaract Club of St. Kitts to bring some awareness of autism here to St. Kitts and Nevis,” he said.

President of the Rotary Club of St. Kitts, Pat Mourillon said the club is committed to working on behalf of autistic persons, particularly children.

“Our club continues to work with children with special needs and we continue to raise awareness and assist in making the life of autistic persons more fulfilling,” she noted.

Previously, the Rotary Club of St. Kitts hosted a cruise for charity to raise funds for the Cotton Thomas Comprehensive School and its work with autistic children.