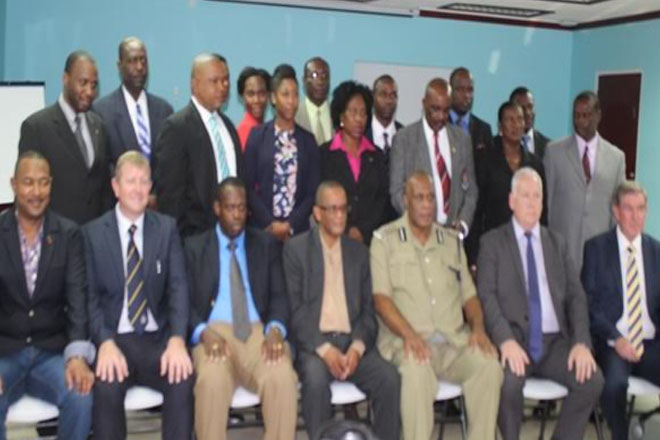 (ZIZ News) — Three representatives of the Royal Police Force of Antigua and Barbuda, one employee of Her Majesty’s Customs and Excise Department and a handful of officers of the Royal St. Christopher and Nevis Police Force received certificates of completion following Friday’s closing of an Advanced Serious Crimes Investigators Course.

The RSCNPF came in for high praise from Antigua and Barbuda’s Police Commissioner, Wendell Robinson, who was among the officials at the closing ceremony.

Robinson, who revealed that his country had recorded five homicides so far this year, stressed the importance of regional collaboration in helping to fight crime.

“I hope that this is just the beginning of what should be community policing or policing within the touch of a button,” he said noting that because of the geographic location of both countries, there is obvious need for partnership.

“Whether we believe it or not, if we are attacked by terrorism or some terrorist activity in Antigua, it affects St. Kitts, it affects Anguilla, it affects all of us in the Caribbean,” he said, adding that “We should not be naïve to what is happening worldwide and think that it will not happen within our borders and therefore, we have to be prepared.”

“The court is demanding more from us by skilful lawyers, by certain witnesses, certain evidence that is important and we must follow certain protocol based on certain court decision hence it is important that we adopt to new practices and we change accordingly,” he explained.

The course began on November 16th and was facilitated by John Miles and Robert Crawford who are associates of Bramshill Policing Advisors, a team from the United Kingdom that had been working with the police force for several months.

The closing ceremony was held in the Training Room of the Customs and Excise Department in Bird Rock.