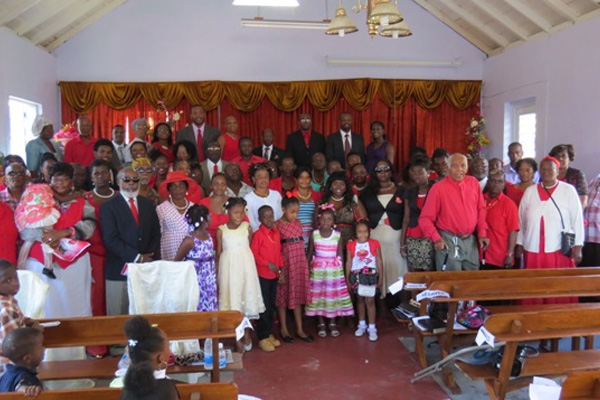 Scores of constituents and Labour supporters attend church in Challengers

Basseterre, St. Kitts (CUOPM) — St. Kitts and Nevis’ Prime Minister and Political Leader of the governing St. Kitts-Nevis Labour Party, Cabinet Ministers and the Parliamentary Representative for St. Christopher 4 (Challengers to New Guinea), the Hon. Glen Phillip, were thanked Sunday for improving the lives of nationals of the twin-island Federation.

“Thanks to you Prime Minister and your ministers for improving the lives of the people of St. Kitts and Nevis,” said Pastor Wadsworth Bowers, as scores of constituents and supporters of the St. Kitts-Nevis Labour Party joined Parliamentary Representative Philip in a morning service at the United Pentecostal Church of the Assemblies of God in Challengers.

Pastor Bowers noted that while there must be opposition, their efforts must not be to “tear down the country, but to help build it.”

As the Prime Minister, his ministers and party leadership, including candidates, stood at the altar, prayers were said for Prime Minister Douglas, the Cabinet ministers, the candidates and the Party Executive.

“The bible says pray for those in authority,” said Sis. Bowers.

In brief remarks, Parliamentary Representative, the Hon. Glenn Phillip, noted that the Service is being held at the church where he was baptized, nurtured and taught to be humble, which is one of the hallmarks not only of his life but also of his political career.

He noted that since he was elected as Parliamentary Representative in January 2010, thanks to Prime Minister Douglas and his Cabinet colleagues, he has delivered in several areas for the people of the constituency.

Mr. Phillip singled out the area of housing as one of the success stories and disclosed that a ground breaking ceremony will be held this week to start a new housing development at Stone Fort.

Invited to say a few remarks, Prime Minister Douglas, who received a tumultuous standing ovation and resounding applause on his arrival, congratulated Minister Phillip for a successful start to the week of activates and thanked the clergy of the United Pentecostal Church of the Assemblies of God for hosting the service.

He thanked the Bowers family and the church leadership for providing Minister Phillip, an opportunity for him to receive his earliest instructions and that it was not by coincidence that he has remained humble.

Deputy Prime Minister the Hon. Dr. Earl Asim Martin said the outpouring of support is not only “a revival in the Lord and Constituency #4.”

The Hon. Marcella Liburd saluted the women in the leadership of the churches in St. Kitts and Nevis. She commended the Hon. Glenn Phillip and said he can count on her full support.

Mr. Maynard and Dr. Wilson spoke of the importance of God in daily living and said that the people of St. Kitts and Nevis and the various constituencies cannot erase the successes and achievements over the years.