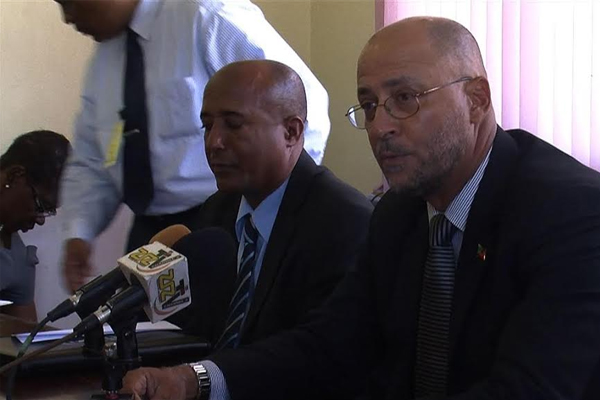 In addition to offering condolences to the families of the men who lost their lives on behalf of the government and SCASPA, Senator Skerritt provided information on the investigations, which are ongoing.

The first issue addressed was that of the incident on Wednesday afternoon where a small motor vessel capsized at Port Zante.

“Mr. Dowell-Daniel was an employee of the St. Christopher Air and Sea Ports Authority and Mr. Browne, the captain of the vessel, was an employee of S. L. Horsford & Co. Ltd,” he said. “Mr Dowell-Daniel was performing his regular duties as a linesman when the tragic incident occurred. I understand that the vessel involved is owned by S. L. Horsford & Co. Ltd. and was contracted to the ships’ local agent, Delisle Walwyn & Co. Ltd, specifically to transport Mr Dowell-Daniel to carry out his linesman’s duties.”

“The deceased SCASPA employee, Mr Dowell-Daniel, with the support of the launch captain, Mr. Browne, had been in the process of releasing lines for the 5.00 p.m. departure of one of the two cruise ships which visited our port yesterday. Shortly after yesterday’s incident I engaged by telephone with a senior official of the ships’ owners in Miami, Florida, who have pledged to do all that they can to assist local police with the investigations related to this horrible tragedy,” he added.

“Video footage from the security camera system of the second berthed cruise ship which was due to leave port one hour later, is expected to be available by Monday for review by the Royal St. Christopher and Nevis Police Force. I am also aware that the Masters of both ships have already emailed their written reports on the incident. I must also let you know that two maritime safety officials of Royal Caribbean Cruise Lines, the owners of the two cruise ships, will arrive here within the next few days to assist with the investigation. We will continue to engage actively with RCCL & Celebrity cruise lines over the course of this investigation,” he said.

The minister also briefly addressed the incident involving Askeo Williams, who died in an accident at the airport.

“Yesterday’s tragedy came just three days after the body of Askeo Williams, an employee in SCASPA’s maintenance department, was discovered on Sunday morning trapped at the bottom of an elevator shaft at the RLB International Airport. Mr. Williams had last been on scheduled duty for SCASPA on Friday and had been reported missing over the weekend by his family. As you know the first media release on the incident was made on Sunday afternoon by the Royal St. Christopher and Nevis Police Force who are still in the process of conducting an investigation into circumstances which led to the death of Mr. Williams,” he said.

Senator Skerritt also noted that independent specialist assistance has been sought from a North American company which specializes in risk assessment surveys for the insurance industry. They will arrive on Friday, to further assist with the investigations in to both incidents.