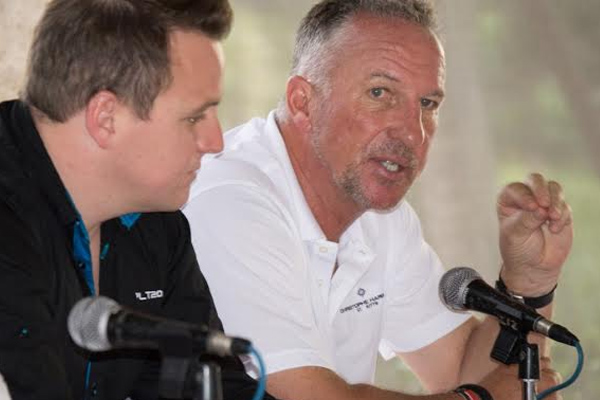 Basseterre, St. Kitts (SKNIS) — Legendary cricketer Sir Ian Botham is excited about a charity match to be held in St. Kitts and Nevis during the Limacol Caribbean Premier League T20 tournament in August. The proceeds of the match, being dubbed the “Beefy Bash” will be donated to a local nonprofit organization (s).

“We will be giving something back,” said Sir Ian, who through his relationship with Christophe Harbour has developed “a love” for the twin-island federation. This was a motivating factor when he approached CPL officials about organizing the benefit match. He is using his influence to reach out to other past and current players to participate including Brian Lara, Sir Vivian Richards, Kevin Peterson, Wasim Akram, Shane Warne, Brett Lee and news personality Piers Morgan.

“It will be exciting,” Sir Ian promised. “…I am looking forward to it and I think the island should look forward to it and I think they should embrace it because it is special. These kinds of things you expect to go to Barbados or Trinidad or Jamaica. No, it’s coming to St. Kitts and Nevis and that is special and I think it will be a very, very special 30 days tournament with the semifinals and finals here. I take my hat off to St. Kitts and Nevis, well done.”

Sir Ian and Lara will captain the two teams. In addition to the international players a number of local players will be selected to participate.

CPL’s CEO Damien O’Donohoe explained that the opportunity to impact local players and inspire a new generation was a positive of the T20 tournament and accompanying activities.

“To have people … like Sir Ian Botham and Brian Lara and Sir Vivian Richards who can spend some time with the young players and just give them some guidance and some tidbits in relation to what they’ve done and advice they may have to take themselves to the next level I think is hugely important and something we are very privileged to be associated with,” O’Donohoe stressed.

The “Beefy Bash” all star charity game will be held on August 12.