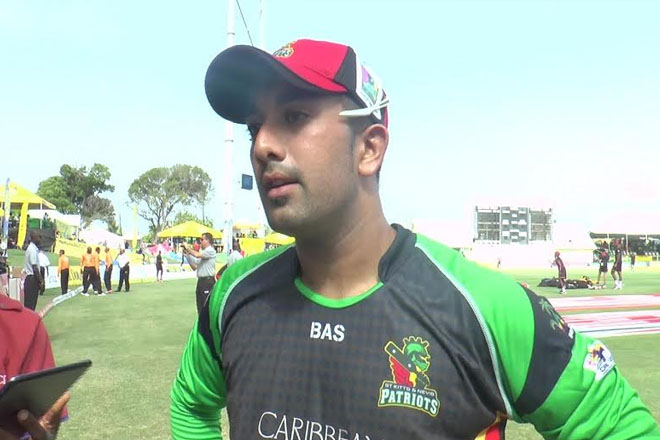 (ZIZ News) — With two wins from four matches so far, the St. Kitts and Nevis Patriots are now sitting in third place in the points table in the Hero Caribbean Premier League.

The team shook off a devastating defeat to the Guyana Amazon Warriors on Friday to record its biggest victory to date when it thumped the Jamaica Tallawahs by 119 runs at Warner Park on Saturday.

Opener Evin Lewis led the way with the bat with a stroke-filled 82 from 45 balls while Tabraiz Shamsi, with 4 for 23, and Sheldon Cotterell 3 for 15, tore through Jamaica’s batting order.

Speaking afterwards, Shamsi said the chemistry in the team is building as the tournament progresses.

“We’ve had up and down performances but I think in general our squad is really good. It always happen in these types of tournaments where you put a team together in a week or so and you have a training camp, it takes a while for the guys to gel together, to get to know each other’s games,” he said.

“So you could say it was a bit of frustration but it’s really more joy with the whole team doing well, the batsmen coming to the party, the bowlers; fast bowlers, spinners; everybody doing well. You’ve just got to enjoy the good moments and learn from the bad ones and I suppose that’s what it is,” he added.

With his first four-wicket haul of the tournament, the South African said he is finally adjusting to the Caribbean climate.

“It takes a while to adjust to different conditions, you know back home the ball doesn’t turn as much and things like that and where ever you go it takes a while to get used to that. Personally, it went quite well but it was an overall team effort, you know the fast bowlers set us up in the powerplay, they took early wickets. So overall, the bowling unit really clicked, in batting, fielding, so it was really good,” he said.

Shamsi noted that the Patriots has also proved it is a team to be taken seriously, after picking up wins against the tournament’s last two champions.

“We believe we have a very good squad, you know, a complete squad. We’ve got all bases covered; fast bowlers, batsman, all-rounders, spinners so it’s just a matter of time and continue to grow from strength to strength. Like I mentioned, the two teams we’ve beaten they are traditionally the big teams in the CPL so there’s nothing to say that the Patriots are a weak team. T20 is a game you know where any team can win on the day, it just depends on which team shows up,” he said.

The St. Kitts and Nevis Patriots will face the Barbados Tridents in its next match on Monday at 6pm.