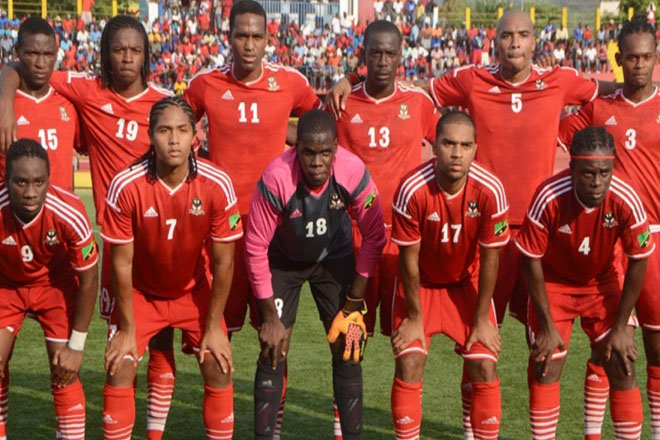 Basseterre, St. Kitts, 9th May 2015 – The St. Kitts-Nevis senior men’s football team will engage Barbados over the weekend in an international friendly match aimed at honing their skills for their tango with El Salvador in June.

The team departed St. Kitts on Friday 8 for the Sunday match-up in Bridgetown. According to Stanley Jacobs, secretary general of the St. Kitts-Nevis Football Association, the friendly is intended to bring the national team together in a competitive environment.

Jacobs expressed high confidence and expectations for this year’s senior team and believes they are competitive.

But the team’s participation in the Barbados friendly has another aim beside preparation for the El Salvador encounter. According to Jacobs, the international match would provide needed practice for another purpose.

Meanwhile, as the national team enhances its skills and physical preparedness in Barbados, national team Assistant Coach Shavon Douglas is looking ahead to the encounter with El Salvador in June. “The team’s technical proficiency is good, but notwithstanding, we are coming up against a formidable opponent in El Salvador, so we are fully aware that technical proficiency has to be stepped up a few notches,” said Douglas,

Douglas said along with technical skills, the team is also preparing, mentally, to meet the higher ranked team from El Salvador.

“We believe that the game has to be won on the field of play, not withstanding our respect for El Salvador. Part of our psychology in preparing for the event is that we believe we have every right to be on the same pitch as they are, and we are going out believing that we can do it, as long as we can execute in the right places and at the right time,” the assistant coach stated.