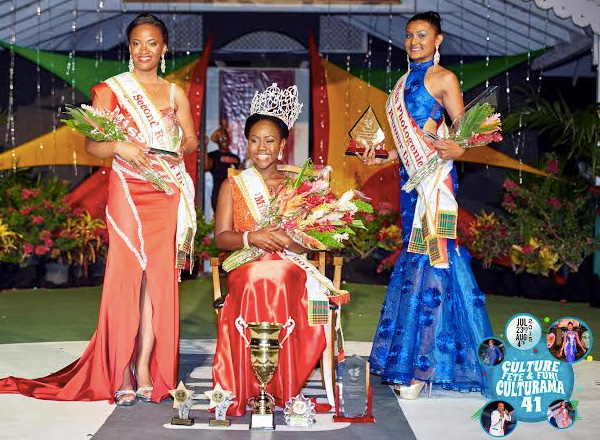 An elated mother ran onto the stage on Monday morning after it was announced that her daughter, Evania Thibou, is the new Miss Culture Queen.

Thibou, the St. Kitts-Nevis-Anguilla National Bank’s representative in this year’s pageant, thrilled the audience and judges to secure the Best Interview and Best Talent awards.

Thibou’s presence was felt very early in the pageant when she paid tribute to well-known steel pan player, Basil “Bam” Manners. She continued with her focus of paying homage to the steel pan with a pan inspired red one piece swimsuit and evening gown.

Perhaps her talent presentation was her most memorable performance. She began with a dramatic comparison of traditional cultural music and today’s popular music genres and ended with a pan rendition of calypso songs that have become synonymous with Nevis’ Culturama festival.

Following the announcement, Thibou told ZIZ News that she was “overwhelmed.” “I want to thank my entire team. They have worked very hard with me,” she added.

Babita Seelall, another of the crowd’s favourite contestants, placed First Runner Up. She, along with Miss Carib Brewery Keelia English, captured the Best Swimwear award. She also received the Most Photogenic award.

The other contestants were Harsha Parmanand and Miss Development Bank Joneika Smithen who won the Best Evening Wear award.