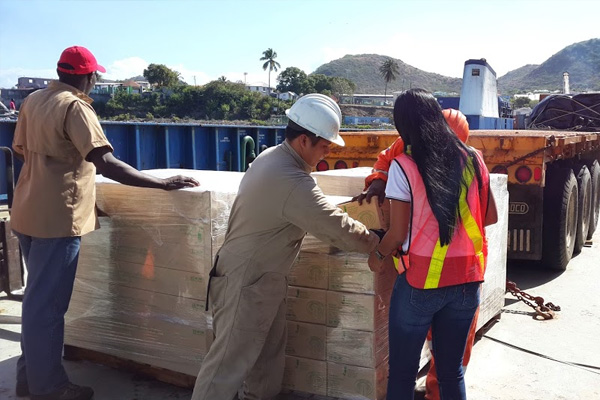 Some 200,000 energy-saving bulbs to be distributed via plan between the Governments of St. Kitts and Nevis and Venezuela

Basseterre, St. Kitts (CUOPM) – In an attempt to further reduce the cost of electricity to consumers, St. Kitts and Nevis and the Bolivarian Republic of Venezuela are collaborating in a plan that will see the distribution of over 5,000 energy-saving bulbs in the twin-island Federation.

The acquisition of 5, 450 energy-saving light bulbs, marks the start of a plan by the Government of Prime Minister the Right Hon. Dr. Denzil L. Douglas, with the support of Venezuela, to promote the rational and efficient use of electric power, through the Petrocaribe joint venture PDV St. Kitts & Nevis Limited constituted by both nations.

This plan is a government policy of the St. Kitts and Nevis leader, who has set as a priority the implementation of programmes for the efficient use of energy in order to reduce the cost of electricity for everybody.

Venezuela has successfully replaced incandescent light bulbs thus lowering the electricity bills for its residents, hence its participation in this plan.

Prime Minister Douglas met with Petrocaribe President Bernardo Álvarez and agreed to start the programme which includes an information campaign on the optimal use of energy.

According to Álvarez, the energy-saving light bulbs, which will replace the traditional incandescent light bulbs, are manufactured in Venezuela by Vietven, a joint venture formed by Venezuela and Vietnam.

He stated that the replacement programme is expected to optimize in 80% the use of hydrocarbon fossil fuels, “more of these savings can be dedicated to productive activities on the island.”

Álvarez said that this is first of four phases to be implemented from the energy saving programme, to ensure the supply of energy and reduce the cost of the use of electricity generated by incandescent lighting, especially among the most vulnerable families.

“This program responds to the Petrocaribe resolutions, from the third and fourth summits of Heads of State and Government, which called for the creation of efficient energy use plans in the region”, he said.

During the second phase, the programme will be conducted at a mass scale with the substitution of 194, 500 light bulbs in residential areas as in public institutions and particularly in schools, health centers as well as cultural and sports facilities.

During the third and fourth phases, an integrated system for the recycling of light bulbs will be implemented as well as a migration to LED technology, which soon will be added to the production lines of Vietven.

A bi-national multi-disciplinary team will provide technical assistance and an education campaign will be carried out through the media and the schools to raise awareness on the importance of efficient energy use. This will benefit the country as there will be more availability of fossil fuels and communities will soon feel the impact on their electricity bills.

Petrocaribe is an integration initiative, founded in 2005, to promote actions to reduce the asymmetries in the access to energy resources in the region, under the principles of solidarity and cooperation while honoring the sovereignty of the states. There are 18 nations from the Caribbean and Central America that are Petrocaribe members.

Several years ago, the Government of Cuba participated in a similar programme.