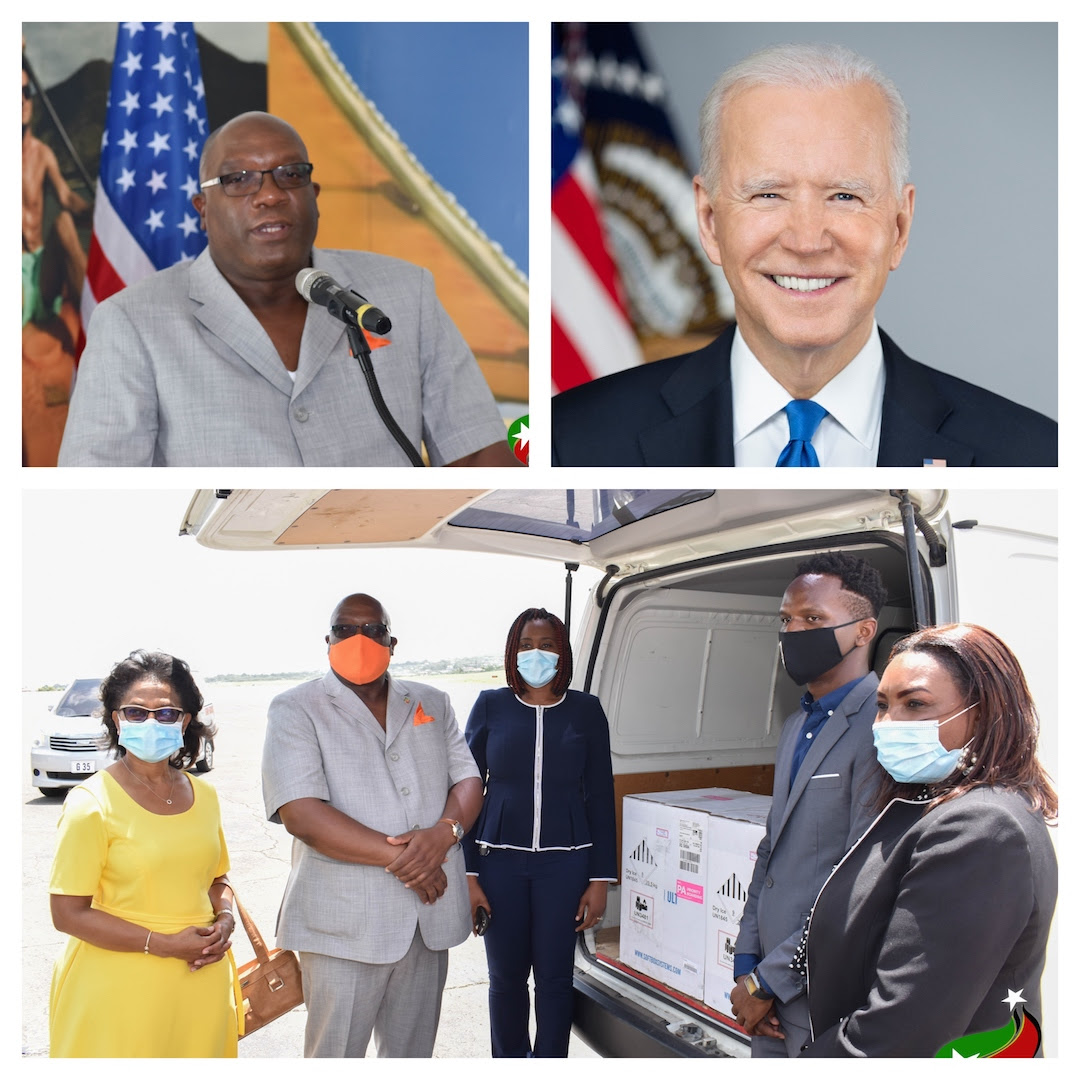 St. Kitts And Nevis Prime Minister Lauds U.S. President Biden For The Generous Donation Of COVID-19 Vaccines To The Caribbean

BASSETERRE, St. Kitts, August 13, 2021 (Press Unit in the Office of the Prime Minister) – The Prime Minister of St. Kitts and Nevis, Dr. the Honourable Timothy Harris, has publicly thanked the President of the United States of America, President Joe Biden, for his administration’s favourable response to the pleas of developing nations for the distribution of COVID-19 vaccines.

Prime Minister Harris’ commendation came as St. Kitts and Nevis received the first of three expected tranches of the Pfizer-BioNTech COVID-19 vaccines from the United States of America on Thursday, August 12. This first tranche included some 11,700 doses of the vaccine.

“Today we received the first tranche of 11,700 doses of the well-known Pfizer vaccine. For this, we express our gratitude to the President of the United States of America, His Excellency Joseph Biden and his administration,” said Prime Minister Harris.

The prime minister continued, “We expect a total of 35,100 doses of this vaccine to further protect our citizens and residents. This significant donation comes as a consequence of high-level diplomacy by Heads of Government of CARICOM and letters written to President Biden by me as CARICOM Lead Head on matters related to Health, Prime Minister Skerrit of Dominica, who at the time of writing was the Chair of the OECS, and of course by Prime Minister Keith Rowley of Trinidad and Tobago, who at that time of writing was Chairman of CARICOM.”

The donation of vaccines to St. Kitts and Nevis forms part of a larger shipment of vaccines to six Caribbean countries in the first instance. The five other recipient nations are Trinidad and Tobago, Barbados, St. Vincent and the Grenadines, Antigua and Barbuda, and The Bahamas.

Prime Minister Harris stated that there has always been a strong bond between the Caribbean and the United States of America. He noted that through the generous donation of the COVID-19 vaccines, that bond has now become even stronger.

“I want to congratulate India again and now the United States of America for heeding this call and I want to personally thank President Biden again, and through him the American people, for their generosity and for helping our region in our fight against this dreaded COVID-19 pandemic,” Dr. Harris added.

The prime minister went on to say, “As many countries experience a third, and in some cases a fourth, wave of COVID-19 and people are travelling around the world, it is evident that no country is safe until we are all safe. I, therefore, reiterate my call to all advanced countries, often described as the wealthiest countries, to allocate their surplus vaccines to those nations in need. I further support the call of Dr. Tedros [Adhanom] of the World Health Organization that advanced countries should defer the implementation of their booster shots to their citizens and residents until countries in the developing world have been able to receive their vaccines.”

Prime Minister Harris said the batch of 11,700 doses of the Pfizer COVID-19 vaccine received on Thursday further strengthens his Government’s vaccination roll-out by providing an additional supply of safe vaccines to fight the dangerous COVID-19 pandemic.