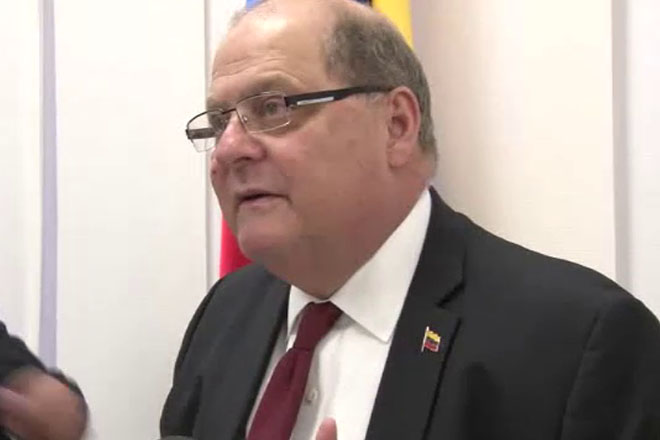 St. Kitts and Nevis to Benefit More from Petrocaribe

(ZIZ News) – The Venezuelan government, through its multilateral Petrocaribe subsidiary, has granted the Government of St. Kitts and Nevis $16 million to compensate former sugar workers.

PDV Caribe President, Bernardo Alvarez Herrera said the Federation stands to gain even more as a result of being a member of Petrocaribe.

Speaking to the media this week, Herrera highlighted some of the areas in which St. Kitts and Nevis has already benefitted from the Petrocaribe agreement.

He said his government is also interested in assisting the Federation in the development of renewable energy.

“The last summit of Petrocaribe, Venezuela put $200m in new projects of renewable energy. So we have generators, we have solar panels and even some urea which is a fertiliser used to improve the capacity of agriculture. And we think there are some projects of solar energy here in St. Kitts that we would like to explore,” he said.

Herrera also disclosed that Venezuela is in the process of providing St. Kitts and Nevis with thousands of energy saving light bulbs for residential use.

He said, “We have already talked to the government and the first shipment of bulbs, which was for 6000 something, as a pilot programme, we will share it 60 percent to St. Kitts and 40 percent to Nevis and to start that as a pilot project because it is a way of also helping people in their bills. It’s energy saving, energy conservation and it helps people to reduce what they have to pay for electricity. So on the one hand, we understand that oil and oil supply is important and we continue with products, diesel for example, but also we would like to explore this renewable energy.”

St. Kitts and Nevis is one of 19 countries that has signed on to the Petrocaribe agreement, which is an oil alliance between Caribbean countries and Venezuela to purchase oil on conditions of preferential payment.