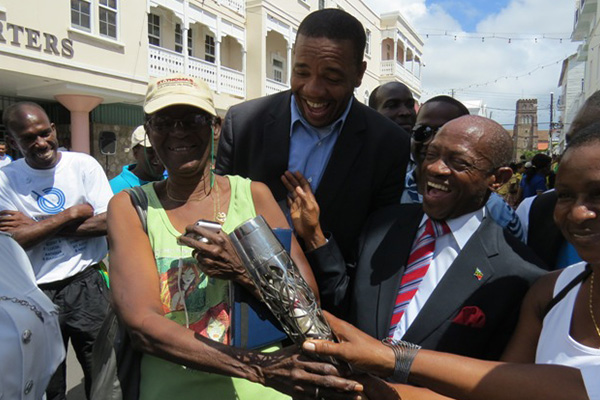 Basseterre, St. Kitts (CUOPM) – Students from the Beach-Allen Primary School, which is twinned with a school in Scotland, hosts of the 2014 Commonwealth Games, had a golden opportunity to touch the Queen’s baton on Friday – thanks to the Federation’s Prime Minister the Right Hon. Dr. Denzil L. Douglas.

Following a ceremony on the steps of Government Headquarters, Prime Minister Douglas, Minister of Sports, the Hon. Glenn Phillip and President of the St. Kitts and Nevis Olympic Committee, Mr. Alphonso Bridgewater, took the baton first to the employees of the St. Kitts Solid Waste Management Corporation (SWMC).

The Beach-Allen students were joined by their counterparts from the Maurice Hilllier Memorial Junior School and the Irish Town Primary School – who were among scores of persons who had assembled outside Government Headquarters to see the Queen’s Baton, which arrived Thursday at the Robert Llewellyn Bradshaw International Airport.

Civil servants were also among those who get the opportunity to touch and take photos with the Queen’s Baton.