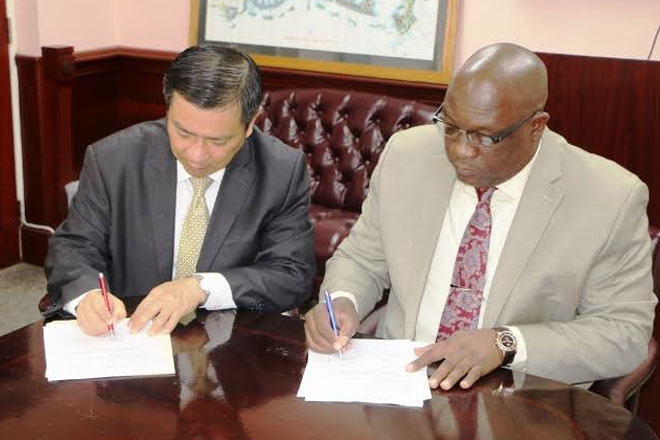 Taiwan Partners with St. Kitts and Nevis in Crime Fighting

(ZIZ News) — The Government of the Republic of China (Taiwan) has once again demonstrated its solidarity with the Government and People of St. Kitts and Nevis. This time, through the donation of two cheques, totalling hundreds of thousands of dollars.

The cheques were handed over, on Monday at Government Headquarters, to Prime Minister, Hon. Dr. Timothy Harris who assured Taiwanese Ambassador His Excellency George Gow Wei Chiou that the donation will help to fight crime.

“The contribution is in support of our crime fighting activities and in particular, to strengthen the capacity and the capability of the police to deliver law and order. We have always made it clear that when it comes to the maintenance of law and order, when it comes to the preservation of the criminal justice system, this Team UNITY Government will spare no effort and will leave no stone unturned. We will go all the way for the peace and security of our country,” Dr. Harris said.

He said “As St. Kitts and Nevis works strenuously to secure safety and security for her citizens, Taiwan has been lockstep with the Federation in their endeavour. In response to the Honourable Prime Minister’s determination, the Government of the Republic of China Taiwan….extend our continued support to the Government of St. Kitts and Nevis,” adding “We are pleased with the way the six-point plan is unfolding and effectively implemented. The security infrastructure has been bolstered with the new equipment being introduced to police.”

With respect to climate change, Dr. Harris said Taiwan had been helpful in sponsoring participation in a number of events, and as such, he made an appeal to the international community at the United Nations for Taiwan’s inclusion in that body.

“At the recently concluded UN meeting, I made a special plea for the international community to ensure that Taiwan is included in the conversations in the international discourse relating to climate change and alternative issues,” he said, adding that “Taiwan’s rank in the top 20 largest countries by way of gross domestic profit (GDP) and per capita GDP statistics, is a significant indication of its power and strength.”

The first cheque, worth more than EC$800 thousand, is earmarked to aid anti-criminal activities while the second cheque of more than EC$19 thousand is to mitigate disasters due to climate change.