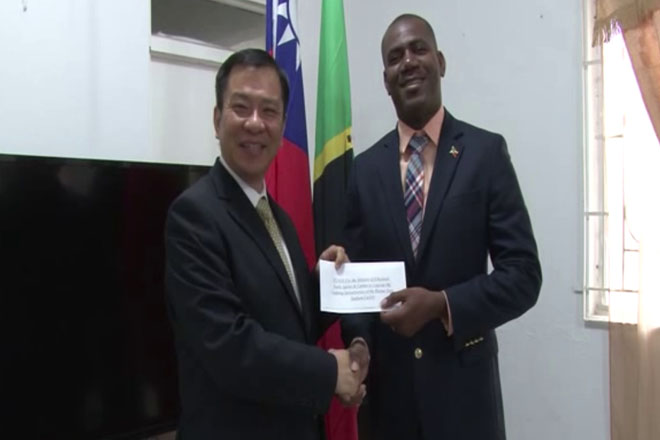 On Tuesday, Taiwanese Ambassador to St. Kitts and Nevis, His Excellency George Gow Wei Chiou presented a cheque valued more than EC$800,000 to the local government to aid in upgrading the lights infrastructure at the Warner Park Football Stadium.

Ambassador Chiou expressed his government’s commitment to continue its partnership with St. Kitts and Nevis.

Minister of Sports, Hon. Shawn Richards said he believes the much needed upgrades to Warner Park will certainly help boost the success of the national football team.

He said, “Our Sugar Boys have done well. Having qualified for the second round of the FIFA World Cup Russia 2018 Qualifiers, the Sugar Boys have brought a premier FIFA team to our Federation, generating opportunities to propel St. Kitts-Nevis football to first ever achieved heights of success and by extension generate renewed passion for the sport of football in our Federation. My ministry has sought to ensure support of the national team’s effort through the improvement of the existing lighting infrastructure at the football stadium at a cost of EC $1,786,640.76 to meet preferred FIFA venue lighting standards of 1,300 – 1,500 lux.”

Minister Richards, who also serves as the Federation’s Deputy Prime Minister, expressed his profound gratitude to the Government of Taiwan for its assistance in this project.

“Let me say that I am truly thankful that we are here today to share in yet another act of benevolence and commitment to the diplomatic relations and friendship established between the governments of St. Kitts and Nevis and the Republic of China on Taiwan. The Government of Taiwan has continued to demonstrate their support of the development of sport in the Federation, in this instance through the generous contribution of EC $867,106 to the upgrade of the lighting facilities at the Warner Park Football Stadium,” he said.

The St. Kitts and Nevis Sugar Boys will host El Salvador on June 11th at the Warner Park Football Stadium as part of their 2018 FIFA World Cup campaign.