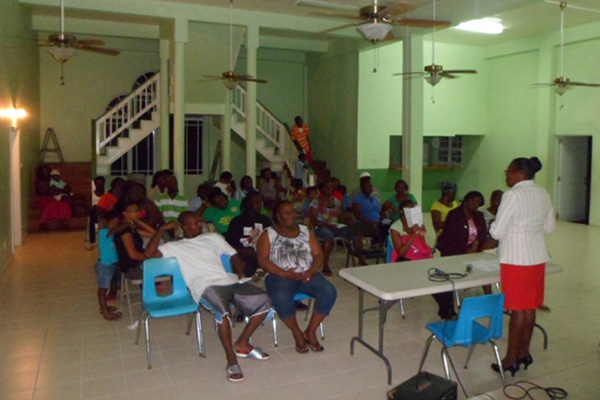 Basseterre, St. Kitts– The Beach Allen Primary School has embarked upon a series of Parents/Teachers Meeting dubbed “Meet the Parents”.  The idea behind this initiative was to go into the communities that serve the school to meet with the parents and guardians.  Many a times meetings are called and parents do not show up for various reasons.  Hence going to them should minimize the varied reasons for not attending.

Secondly, volunteering to be a part of the PTA Executive was never forth coming from some communities; therefore, the onus will be place on these communities to form their own PTA Committees.   From these subcommittees two (2) persons will serve on an umbrella committee which will then be considered as the executive of the school’s PTA.

The first of these meetings was held in the community centre at Conaree on Wednesday 22nd January 2014. The turn-out of parents was commendable.   As it was the first time in the history of the school that a PTA Meeting for the community was conducted there, the parents were appreciative of the effort.

The next meeting is for the Basseterre Community which will be held at the Community Centre on Victoria Road next to the Basketball City.  This will be on Wednesday 29th and commences at 4:30 p.m.  This meeting are for the parents or guardians of the students who live at Taylor’s, the Central Basseterre, East Basseterre and the other surrounding communities.

The final meeting in the series will be held on the 1st February.  This would be for the communities of Shadwell, New Road Housing Project and Gillard Meadows.  This will be held at Shadwell at 4:30 p.m.

It is our hope that these meetings achieve their intended purposes in the short terms – formation of communities PTAs; the medium and long term – building and fostering excellent community spirit and bridging the gap, that lack of closeness to the school as its location seem so distant from a greater portion of its feeder communities.