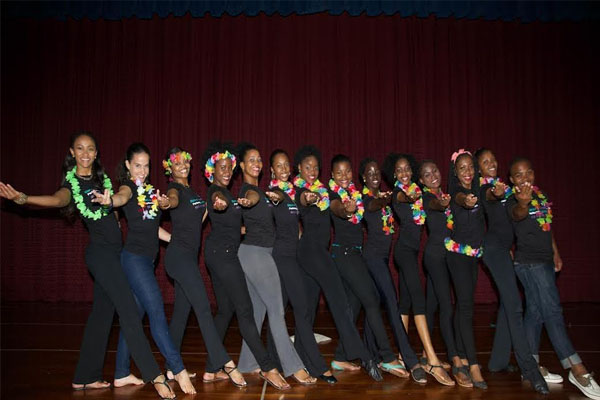 Basseterre, St. Kitts — Over 110 campers radiated the stage at the Sir Cecil Jacobs Auditorium last Sunday, July 27th, for the Stars of Tomorrow Performing Arts Camp: Sea Venture 2014 End of Camp recital and exhibition entitled: “FROM THE SEA TO THE STAGE.” GEF Small Grants Programme – UNDP sponsored this year’s camp in an effort to promote the protection and appreciation of the marine environment through one of the world’s most powerful communication tools, the Performing Arts.

Campers between the ages of 5 and 16 were divided into four groups: Coral Cuties, Shelly Shells, Reef Rangers (boys) and Fintastics who were all featured in choreographed routines which fostered awareness of the marine environment through musical theatre, dance and modelling. The Stars also showcased their self-made eco-couture designs, sustainable jewellery and house- hold accessories to promote the elimination of marine debris through the re-using and recycling of items that often pollute our shores and waters. Admission to the highly anticipated recital and exhibition was free and open to the general public.

The Camp began on Saturday July 19th, 2014 with an interactive orientation session for both parents and campers at the Clarence Fitzroy Bryant College. Aquariums were mounted on campus and all in attendance got their first taste of the marine life curriculum. Throughout the duration of Sea Venture 2014, campers were exposed to a dance curriculum which provided training in the basics of ballet, jazz, hip hop and afro-Caribbean. The end-result of the intense curriculum was a number of dance pieces which informed audiences about turtle nesting habits, cleaner fish techniques and marine environment appreciation. The Arts and Crafts prospectus focused on the re-using and recycling of materials that often pollute the marine environment. This included the creation of beach buckets from 5 litre water bottles, jean pocket and tank top bags, bracelets and dolls made from small water bottles, draft boards from boxes, t shirt and tie-dye fashion outfits, paper dance tutus, vases from bottles, sharks and jelly fish from foam cups and bowls as well beautifully designed sun visors. All of these pieces were highlighted during the art exhibition and modeling component of the recital.

Campers also had the opportunity to visit and learn about the Conaree based St. Kitts-Nevis Aquaculture Pilot Project and Environmental Research salt-water fish farm (SNAPPER). While there, a cheque of $1000.00 was handed over to Dr Barrington Brown by Children’s Dance Theatre Director – Julie Martin and Tricia Greaux. On Friday July 25th, along with their parents, campers embarked on an exhilarating glass bottom boat cruise along the coastline of St. Kitts.