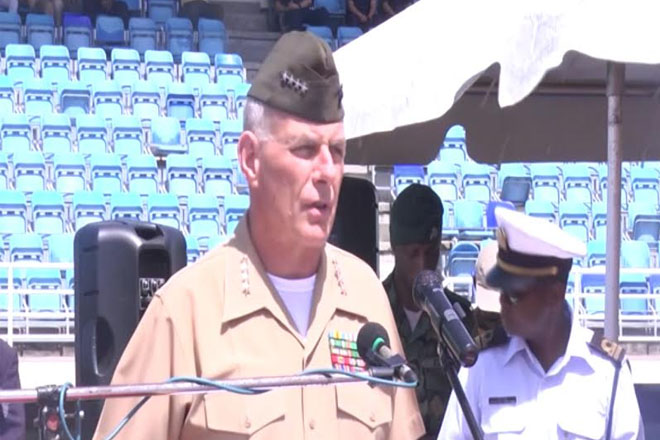 (ZIZ News) — The Maritime Phase of Exercise Tradewinds 2015 ended on Tuesday with a closing ceremony at the Kim Collins Athletic Stadium.

500 participants, who travelled from 13 CARICOM member states, the Dominican Republic, Canada, the Netherlands, the United Kingdom and the United States along with approximately 200 participants from the Federation, completed intense maritime training as part of Exercise Tradewinds 2015.

The closing ceremony saw representatives from each participating nation on display in full uniform.

“Phase 1 provides a dedicated venue that focused on synchronizing disaster response encounter to transnational organised criminal organizations. Over the past few weeks, over 750 participants from 17 different nations worked together and participated in challenging real life training scenarios that tested the capability of all our service members in our collective response efforts. I’m proud to say our forces knocked this test literally out of the park. While the technical skills learned and practiced at Tradewinds are important, the most valuable outcome of any exercise is the partnerships forged among all participants in all of the nations,” he said.

“Today is a day of reflecting on what you have accomplished. A day on which you ponder on how you can build on your accomplishments so that collectively, the region can face the future with confidence. Today, we celebrate the achievements of our security forces, NEMA and other citizens who have successfully completed the first phase of Exercise Tradewinds 2015,” he said.

Each participating nation was presented with a plaque to mark the end of the training.

Phase Two, which focuses on land operations training, will be conducted in Belize from 14th – 24th June.

Phase Three is a Key Leader Seminar, featuring regional stakeholders and decision makers. That is planned for July 14-16 in Miami.