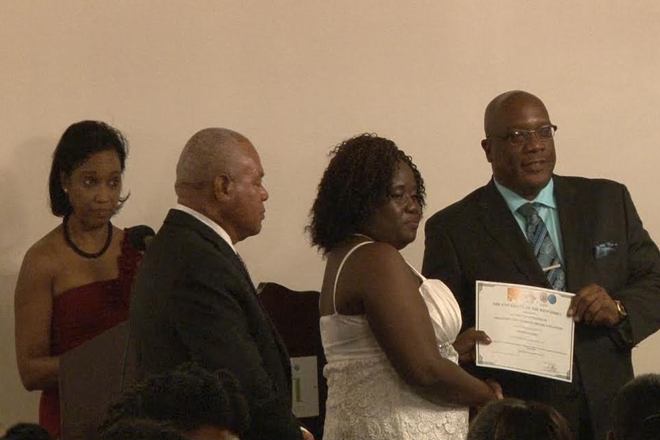 (ZIZ News) — Almost sixty persons are now better equipped to assist in drug abuse prevention after graduating from a training and certification programme.

The fundraising event officially marked the end of the Training and Certification Programme for Drug and Violence Prevention, Treatment, and Rehabilitation.

Chairman of the National Drug Council, Dr Milton Whittaker noted that the graduands now have the skills needed to advance the fight against drug abuse and encouraged them to do their best.

“The graduands have now acquired the expertise to assist with the prevention of drug abuse and also the treatment of those who for various reasons have fallen prey to drug abuse,” said Dr. Whittaker. “Graduands, many times over the years, it appears nationally and internationally that the war on drug abuse was lost, then came some successes. Do not give in, continue the fight.”

In highlighting the importance of the training prime minister, Dr the Hon Timothy Harris noted that drug abuse impacts users, their families, and entire communities.

“The Police High Command and officers of our Criminal Investigations Department and the Violent Crimes Unit in the Police Force are of the firm view that many of the violent crimes including homicides that are occurring in the Federation are connected, in some way, to the use and trafficking of drugs one type or another,” he said.

The ceremony was held under the patronage of the Governor General, His Excellency Sir Tapley Seaton GCMG, CVO, QC, JP, and attended by top Government officials, including the Minister of Health, Honourable Eugene Hamilton, members of the Police High Command, members of the diplomatic corps, persons from the private sector, financial institutions and specially invited guests.