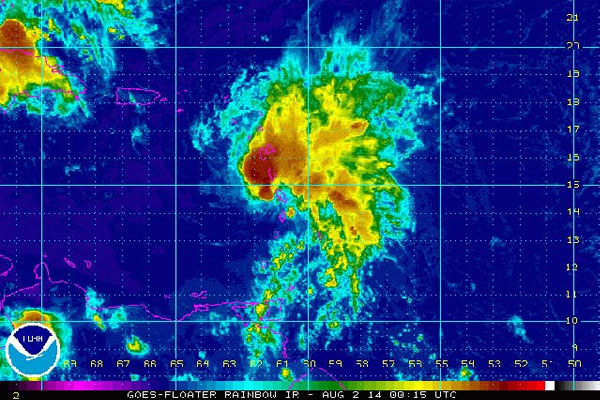 ZIZ News — Weather officials predict St. Kitts and Nevis will be feeling the effects of Tropical Storm Bertha in less than 24 hours.

Senior Meteorological Officer, Elmo Burke told ZIZ that while the storm will pass about 100 miles south of the federation, the islands still be impacted by the northern weather bands.

“We can anticipate some cloudy to overcast conditions, some moderate to heavy showers, as well as some thunderstorm activity. We’re also anticipating some gusty conditions, near tropical storm conditions especially in the sandy point to Dieppe Bay area. And we’re anticipating very rough seas. Seas up to about ten feet”

He also said residents need to be cautious of the ghauts and sea condtions over the weekend.

“Once we see the one to three inches of rainfall materialize there is the potential for the ghauts to run as well as with the sea conditions being that hazardous with 10-foot swells we’re asking mariners to take the necessary precautions,” he stated.

The National Emergency Management Agency’s Districts Coordinator, Telca Wallace said they do not foresee any major damage occuring but cautioned persons who may be travelling to and from Nevis for Culturama.

“As we approach this weekend we know it’s a busy weekend in Nevis where we have our Cultural festival and the sea is our major concern at this time where persons would be hoping to get to nevis to enjoy the festivities and we’re asking the persons with vessels adhere to the information from the met office and that persons do not put their lives in danger at any time.”

The MET Office and NEMA said they do not expect the storm to become any stronger. They have been meeting with other agencies to plan responses, if necessary.