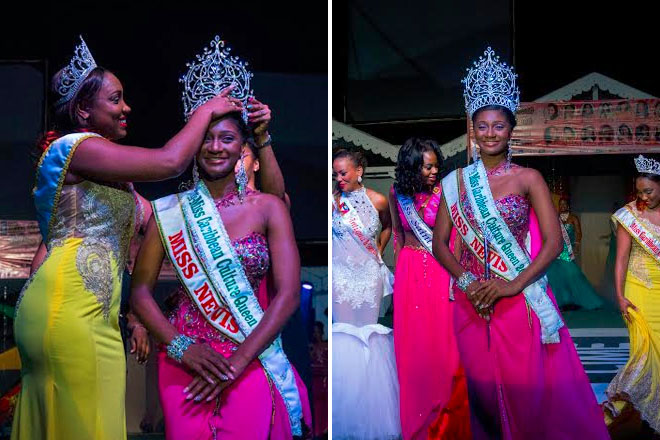 (ZIZ News) — Host country Nevis, walked away with this year’s Ms. Caribbean Culture Queen title. This comes as Akiesha Fergus put on a spectacular performance for hundreds of pageant lovers at the Cultural Complex in Nevis on Monday night.

Fergus is the only Nevisian to capture the crown since Jamilla Parris won 10 years ago.

The pageant, which is in its 10th year, was held over two nights. It began with the Swimsuit Competition on Saturday at Lime Beach Bar and continued on Monday with the Talent and Interview Competition.

Fergus’ poise, confidence and overall consistent performances secured her the top spot as she began her journey with a stunning blue one-piece swimsuit which was filled with rhinestones on her tummy and stomach. Equally as beautiful was her fiery hot red two-piece swimsuit which featured a creatively designed lace top.

The opening number on Monday night took the form of an Interview although the contestants wore National Dresses and in some cases, costumes, depicting the culture and way of life of their respective countries.

By the Talent round, it was evident that Miss Nevis and Miss Montserrat, Sharissa Ryan, would be the top two contestants of the night.

Fergus modelled a stunning hot pink gown with lace and rhinestones over her torso during the Evening Wear segment. That appearance was followed by the selection of the pageant’s top five contestants. They were Miss Nevis, Miss St. Kitts, Miss Montserrat, Miss Dominica and Miss Trinidad and Tobago. It was then that the contestants were asked to answer a single question.

By the end of that round, the Nevisian crowd became more confident of a home girl victory as Fergus’ response to the question which dealt with legalising gay marriage in the Caribbean secured her a standing ovation.