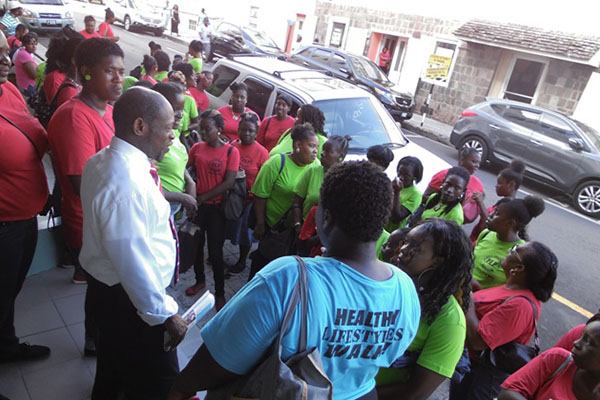 Astaphan, a co-founder of Operation Rescue and a member of the PLP, stepped up his criticism after Prime Minister the Right Hon. Dr. Denzil L. Douglas responding to a question on Tuesday’s “Ask the Prime Minister,” gave the young people in St. Kitts and in Nevis that the one-year-old employment programme will continue.

WINN FM said it took to the streets of Basseterre Wednesday to ask members of the public what they thought of the programme.

“Anything better than nothing,” one woman said matter-of-factly. “It’s a good programme.  Keep the young people off the street, and give some of them opportunity,” said another.

“I think the PEP is a good programme.  I got friends and family, so no complaints,” yet another told WINN FM with a smile.

“It gives the young people to do for a while,” a lady said. “I think it’s a good programme so far,” a young man said, who seemed to be a PEP worker himself. “I know we ain’t getting ‘nough money, but a little one, one could full basket,” he said.

“It’s a help to the young generation to keep them off the road, and to…help them to build something for themselves,” one young woman said when asked.

WINNFM reported that following Prime Minister Denzil Douglas’ defense of the Peoples Empowerment Programme on Tuesday, Operation Rescue’s Dwyer Astaphan took aim at PEP on his own radio programme. The former government minister says temporary work for the unemployed is not good enough.

“I am glad young people and the not-so-young people have temporary employment.  I wish it were permanent, but Denzil Douglas has proven beyond the shadow of a doubt, that he is either extremely incapable or absolutely unwilling to create the platform for sustainable economic development and empowerment for Kittitians and Nevisians, and our brothers and sisters from other islands who share with us in our national experience and movement forward,” Astaphan said Tuesday night.

Prime Minister Douglas in dismissing speculation that the PEP programme is coming to an end, said: “The PEP is continuing.  There’s no reason to believe that the PEP is to be halted,” Dr. Douglas said.

“The PEP of course is absorbing large sums of money every week, and we’re really conscious of that,” he told listeners.

The Prime Minister said that he was aware of reports that the programme was being abused.

“Only an irresponsible government would not be concerned if there are serious charges being made that there is wastage in the PEP, and what the government is seeking to do is to ensure that those who’re organizing the PEP, they cut out the wastage in the PEP.  People must go to work, people must really be taught skills, they must not use the opportunities that have been given to them to learn, to waste time, and thus collect the pay check at the end of the week,” the Prime Minister said.

Prime Minister Douglas is defending the transitory nature of the PEP, which has since been introduced in Dominica and several other Caribbean islands are considering introducing a similar programme.

He said the programme was also to be used as an interim transitionary point of contact between people who have been laid off and those who are waiting to find another job.

In a display at Independence Square last year most of the 24 disciplines in the PEP programme were displayed.