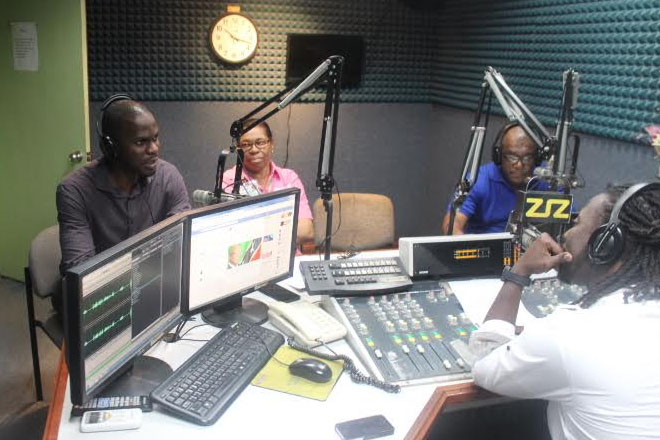 (ZIZ News) – As relief efforts continue for the Commonwealth of Dominica, ZIZ Radio hosted a number of organizations including the St. Kitts-Nevis Red Cross Society and the Rotary Club of Liamuiga in their drive to add another level to aid efforts.

The show which was hosted by ZIZ’s General Manager, Clement Ogarro and Morning Show host St Clair Gcue Liburd placed its focus on updating local relief efforts and the situation on the ground in Dominica. During the Prime Time show, the Rotary Club of Liamigua announced the establishment of a relief fund to accept financial contributions to further its humanitarian efforts.

Local direct deposits can be made to the Bank of Nova Scotia to the beneficiary name “Rotary Dominica Relief Fund”. The account number is 515-441-93.

Local inter-bank transfers can also be made to the Bank of Nova Scotia using transit number 942-35 for the Rotary Dominica Relief Fund. The account number is 515-441-93.

Meanwhile, Kathleen Pinard-Byrne, Director General of the Dominica Red Cross Society, called in during the show and said despite the disaster, the mood in Dominica is positive.

“Dominica is no stranger to disaster. Though I think the number of deaths that were experienced are affecting a lot of persons but people are still optimistic that we will be out of it. Everybody is coming together to offer assistance to those who need at this time around. The Red Cross is doing its assessments and re-distribution,” she said.

Dr. Marcus Natta, Immediate Past President of the Rotary Club of Liamuiga and current Public Relations Officer, said St. Kitts ans Nevis should have ongoing efforts for unforeseen circumstances such as these.

“I want to also continue pushing my Rotary Club and I want persons in St. Kitts-Nevis to continue with the assistance because you know by next week we kind of forget about these things sometimes and we have to realize that persons’ lives are displaced and we still need and this thing is ongoing for them so we should have ongoing efforts,” he said.

Meanwhile, Natalie Fough, Director General of the St. Kitts-Nevis Red Cross Society, is urging well-wishers to be a bit more patient as the Red Cross will do their set of collections later in the week.

“What we’re doing at the moment, because we’re hearing that something will be coming up very shortly, so we’re asking persons to keep a hold on them [items] and we’re doing collection on Friday and Saturday of this week for them to be transported. They have to be properly labelled and we have them documented as well. When they get there, they will have the logistical nightmare of having to doing the sorting,” she said.

The Dominica Relief show also featured a call from Jodi Peeler, Director of International and External Relations at Ross University School of Veterinary Medicine in St Kitts. Ms. Peeler, along with other St Kitts based students are on a mission to Dominica to assist fellow students from the local Campus in Picard, Portsmouth.

ZIZ has pledged to support all relief efforts relating to Dominica.