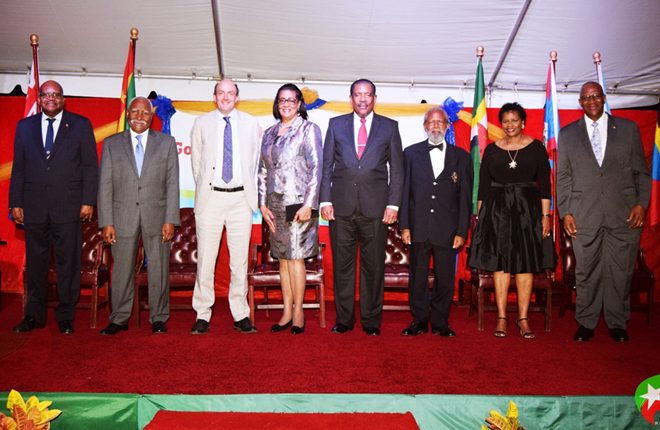 16th Conference of Governors-General and Presidents of the Caribbean Region gets off to warm start in St. Kitts

(SKNIS): His Excellency (H.E.) Sir S. W. Tapley Seaton, Governor-General of St. Kitts-Nevis, warmly welcomed eminent Heads of State to the federation, as they assembled at Government House on Monday, April 09 for the opening ceremony of the 16th Conference of Governors-General and President of the Caribbean Region.

The gathering, which comprises of governors- general, presidents and governors, runs from April 08 to 12 under the theme: “Challenges of a Changing Caribbean”.

In his address to welcome his colleagues, Sir Tapley expressed his delight and honour of having the Heads of State in St. Kitts-Nevis for such an auspicious occasion, while at the same time paying tribute to their predecessors for their “vision in convening a conference” where such a robust body “could meet and enhance collegial relationships and dialogue on national, regional and international significance”.

He said that it was worthy to note that each representative hail from varying areas of endeavour in his or her earlier career paths, and thus, is expected to play a much greater role of contributing to current affairs than just being symbolic office holders or figure heads.

“As educators, scientists, as lawyers, medical doctors, judges, acknowledged cultural exponents, as linguists and crisis leaders… we have all attained the acme of our professions and are able to bring its cumulative experience to serve our respective countries in the highest office,” said the governor-general.

Sir Tapley encouraged his colleague Heads of State to be cognizant of all developments and to take the youth population into consideration.

“It is a constitutional obligation that we be kept apprised and advised of our national developments and we are constitutionally also charged to act in accordance with advice or to act in our own deliberate judgements,” he said. “Whatever the roots, we are obliged to ensure that we contribute in a meaningful way in our country’s developments and provide our advice and advocacy, especially to our youth and ensure that we impart the necessary values to their national well-being.”

He used the occasion to especially welcome His Excellency Sir Colville Young of Belize, Dean of Governors-General, who has been serving for the past 25 years. He also recognized distinguished guest and his family Minister Louis Farrakhan. Sir Tapley wished his colleagues a most rewarding conference as it will redound to the benefit of the region.

Also in the federation to partake in this auspicious gathering is President of the Caribbean Court of Justice, the Right Honourable Sir Dennis Byron and the Eastern Caribbean Supreme Court of Appeal Chief Justice, Dame Janice Pereira.