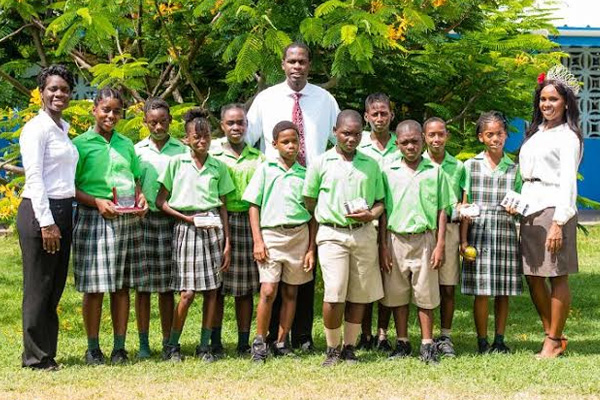 Aamira’s favourite sport is netball and she also plays tennis, cricket and participates in track and field. She has also placed in the top 3 of spelling bee competitions she has entered. Even with all this, she still finds time to be a member of the St. Christopher Swim Club. Kamarr is a consistent honour roll student and competes in spelling bees. He is also a member of the Grass Roots Football programme.

The keynote speaker for the awards ceremony was Reigning St. Kitts and Nevis National Carnival Queen Ms Kaeve Armstrong. Ms Armstrong delivered a dynamic and interactive presentation under the ceremony’s theme “The Essence of True Education”. During her excellent session with the audience of primary school students, Queen Kaeve captured their full attention as she noted that true education is not just going to school and getting good grades but it also involves learning outside of school by being involved in clubs, community groups, sports, etc. and by having values, principles, etiquette, manners, good behaviour, and respect.

“A special highlight for me this year was when Kamarr asked to speak at the end of the ceremony and thanked me for the scholarship and pledged that he would continue to work hard to make us proud,” said Fund Chairman and Founder, Dr Marcus L Natta. “I was extremely moved by this 10 year old young man’s words and it truly makes me feel that our Fund is on the right path and making a positive impact in the lives of our young people.”

The William Marcus Natta Memorial Scholarship Fund was established in April 2010 to support students in grades five and six who demonstrate academic excellence, sound moral character and passion for community service. Each year, two students, a male and female, are selected for the scholarship award.