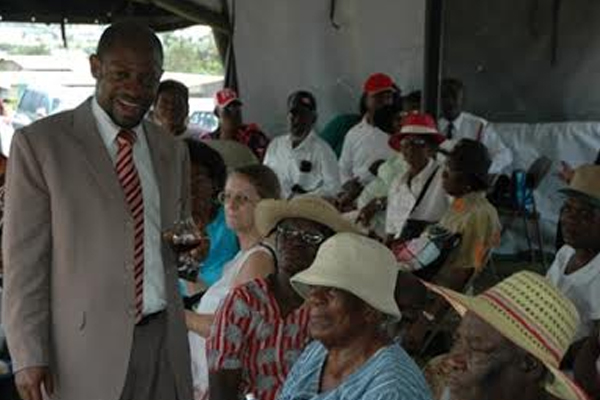 Dubbed “Senior moments with national treasures,” Prime Minister Douglas will personally make the delivery as part of events to celebrate the 25th Anniversary as the Member of Parliament in the St. Kitts and Nevis National Assembly.

Constituents in Saddlers/Harris’, Parsons, Dieppe Bay, St. Paul’s and Newton Ground are to be visited.

The events continue on Monday afternoon with a forum for new voters from the constituency at 5 p.m. in the Agro-Tourism Building at Sir Gilles.

Other activities are a live two-hour radio and TV Special Edition of “Ask the Prime Minister” will be aired from 10 a.m. on Tuesday 25th March. Participants of the Ask the Prime Minister, who will be the 25 students from the primary and secondary schools, will be hosted to lunch following the programme.

Prime Minister Douglas will tour several projects in Constituency Six from 10 am on Thursday 27th and will host a Cocktail Reception & Awards Ceremony at the Agro Tourism facility from 6:30 p.m. to 9:00 p.m.

Friday 28th March is the Constituency Hop & Stop starting at 4 p.m. which includes the official opening of the Main Office on Main Street, St. Paul’s and this will be followed by a Block Party.

Saddlers is the venue for a double event on Saturday 29th March with the Health & Farmers’ Market from 6 a.m. to 10 a.m, and the opening of the Saddlers Constituency Office at 10 a.m.

On Sunday 30th March, scores of constituents are expected to join Prime Minister Douglas onboard the Scenic Railway train from the Sir Gilles Station to the Needsmust Station from 1.p.m. After the tour, Prime Minister Douglas will attend the annual Inter-High Schools Championships at the Silver Jubilee Stadium.

St. Paul’s is the venue for the April 5th – Fun & Fitness starting at 1pm. A Gospel Concert is planned for April 6th at the Robert L. Bradshaw Memorial Park, St. Paul’s at5.30 p.m.

The Prime Minister’s Jubilee Dinner is set for April 12th.