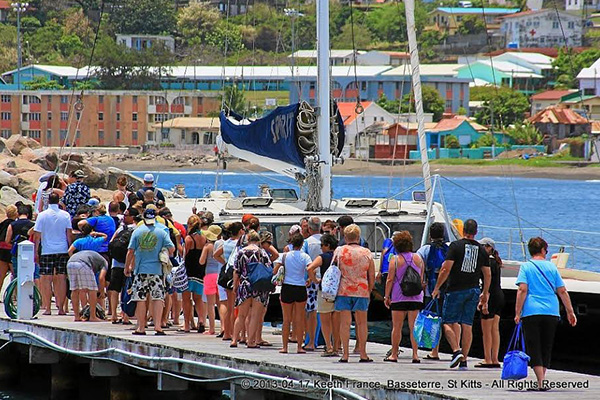 Basseterre, St. Kitts (CUOPM) — St. Kitts will experience its best ever summer cruise ship season in history next year, between May and September.

According to the official 2014/2015 Cruise Ship Itinerary, 70 calls from 9 ships are scheduled during this period with an estimated 258,000 passengers.

Minister of Tourism and International Transport, Sen. the Hon. Richard “Ricky” Skerritt in a message in the 2014/2015 Cruise Ship Itinerary booklet said the cruise ship industry in St. Kitts has “achieved such remarkable growth results, since attracting summer ship visits for the first time in 2008.”

The official cruise ship season in the Caribbean runs from October to April.

Since his appointment as Minister of Tourism in 2004, the action Minister of Tourism has presided over a phenomenal increase in the cruiseship sector.
An estimated one million cruise passengers are expected to visit St. Kitts between October 2014 and September 2015 from 370 ship days.