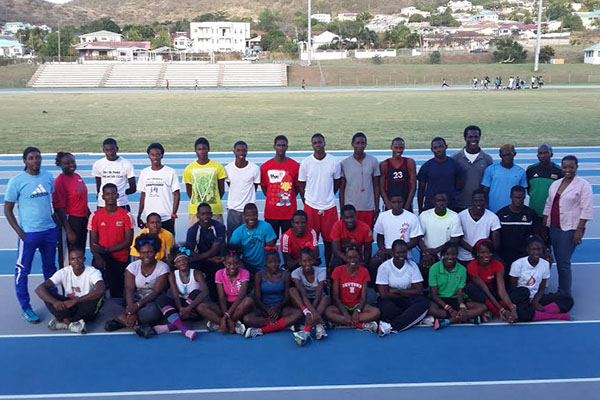 Thirty-three (33) athletes and six (6) officials will be representing the Federation of St. Kitts and Nevis at the 2014 CARIFTA Games, scheduled for April 19th – 21st 2014, on the French island of Martinique.

“I am quite pleased with the composition of the team for this years championships.” Said Glenville Jeffers, President of the SKNAAA. “We have our largest contingent since 2008 when the games were hosted in St. Kitts & Nevis. Throughout the 2014 athletic campaign, these athletes have been working very hard and excelling in their respective events. I would like to thank the SKNAAA’s Selection Committee for making that compelling argument to my executive committee as to why all of these ambitious and hard working young people should be our ambassadors at the 2014 CARIFTA Games.”

According to Head Coach Pyke, “this year’s team is the most multi-facetted to date. Not only is the team of a greater caliber, but also we have representation in almost all of the disciplines of athletics. I am particularly excited to have athletes compete for the first time in the multi events and to also reintroduce participants in the triple jump and hurdles at this level. I have nothing but great expectations for team St. Kitts and Nevis.”

The 2014 CARIFTA Team will be departing the RLB International Airport on Thursday 17th April 2014 at 7:15pm directly to Martinique via Air Antilles Express charter. All with the exception of Adrian Williams who will be traveling with the Trinidad and Tobago contingent, as he’s currently based in Trinidad.

A budget of XCD93,000.00 was approved by the SKNAAA Executive Committee, to fund team St. Kitts and Nevis’ quest for CARIFTA glory. Special thanks is extended to the St. Kitts and Nevis National Olympic Committee (SKNOC) for their sponsorship grant of XCD67,832.75 for the charter to Martinique.