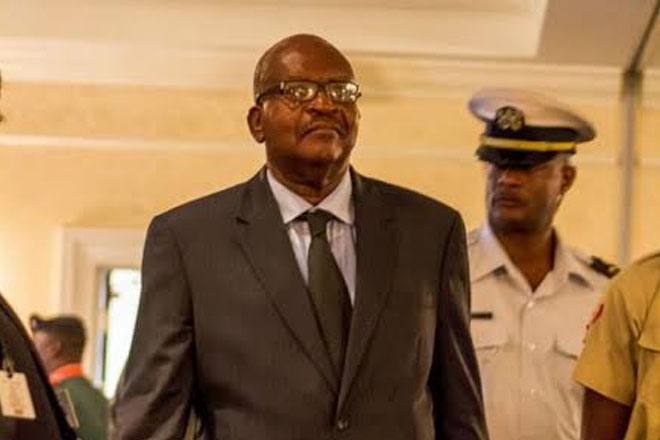 (ZIZ News) — Governors of the member states of the Caribbean Development Bank [CDB] gathered, on Wednesday, for the ceremonial opening of the 45th Annual Board of Governors’meeting.

The welcome address was given by St. Kitts and Nevis’ Acting Governor General, H.E. Tapley Seaton. That was his first official duty since being appointed by Her Majesty Queen Elizabeth II.

Mr. Seaton said the themes to be discussed at the meeting would serve to dictate the future of the Caribbean members of the CDB.

“The dominant themes that are being galvanized in this 45th Annual General Meeting of the Board of Governors include youth entrepreneurship and employment, improvement in air transport within the wider context of logistics and connectivity and public/private partnership as a recipe for future development. Each one of these areas will define, in the medium to long term, the future direction of the Caribbean member nations constituting the CDB,” he explained.

St. Kitts and Nevis’ Prime Minister, Hon. Dr. Timothy Harris, who addressed the meeting in his capacity as Chairman of the CDB, urged the Governors to employ the necessary measures to achieve prosperity for all.

“We cannot achieve the success in creating the prosperity for all without a strong commitment to the sustainable development agenda and stronger partnerships with the international community. It is not just access to financing that matters but the impact and outcome of the uses of those funds, the institutions that we build, the values that we adopt and promote and in the end the civilization that we mould,” he said.

In his presentation, President of the CDB for the last four years, Dr. Warren Smith extended thanks to the individuals who assisted in making changes to the Bank during his tenure.

The Caribbean Development Bank’s 45th annual meeting of the Board of Governors concludes on 21st May 2015.