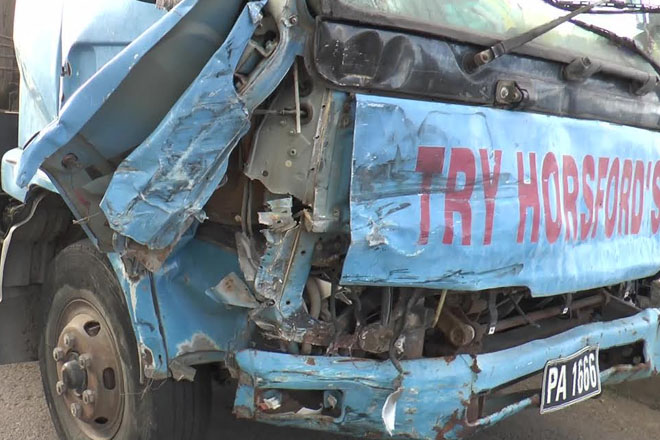 (ZIZ News) — Investigations continue into a traffic accident on Wednesday that sent 8 people to the hospital.

According to the police the incident occurred at about 3:45 pm on Wednesday at Keys involving motor omnibus H 4833 driven by Vincent Tudor of Molyneux and motor truck PA1666 owned by S.L. Horsfords and driven by Osbourne Bute.

The police say the bus was travelling from Basseterre to Molyneux, and while approaching the reservoir near keys the driver observed that there were two trucks coming in the opposite direction.

PA1666 tried to overtake the other truck and in the process collided with the bus.

8 persons were injured: 6 on the bus, two on the truck.

6 persons are still at the hospital. Two were discharged.

The bus was extensively damaged and the right section of the front of the truck was damaged.

The matter is still under investigation and charges are expected to be laid.