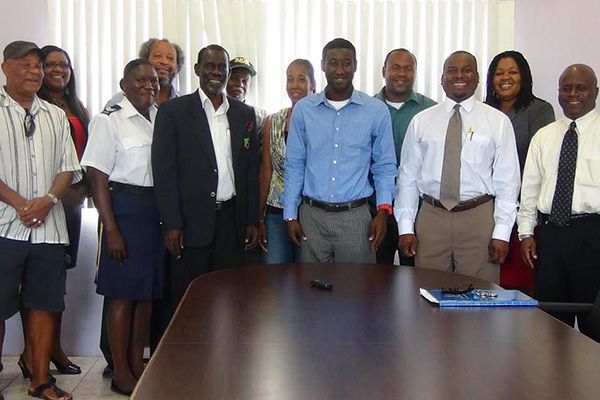 Adrian off to Trinidad

Top Javelin athlete from Nevis, Adrian Williams is on his way to Trinidad for a five month stint ‘in the first instance’.

This was revealed by Permanent Secretary in the Ministry of Sports Mr. Keith Glasgow at an official send off ceremony for the top athlete, held at the conference room of the Administration Building in Charlestown, on Monday 10th February.

Glasgow further revealed that the effort to get the training stint for Adrian was a collaborative one and involved the Nevis Island Administration, The NAAA; The SKNAA and the SKNOC;

Also speaking at the ceremony, was President of the Nevis Amateur Athletic Association (NAA), Lester Blackett who highlighted the many achievements of Williams so far in his impressive career.

Owner/manager of the Gladiator’s track club of which Williams is a part, Wakeley Daniel noted that he had been working on the training stint for Williams for quite some time and expected that it would  have come through since January but noted that it was better late than never.  He admonished Williams to set high standards and told him that ‘nothing less than a gold would do but whatever you get we will be happy,’ as he referred to several upcoming competitions for the young athlete. He pointed out that the ultimate goal was for Williams to compete in the 2016 Olympics.

St. Kitts Nevis Olympic Committee representative Alphonso Bridgewater spoke directly to Williams and gave him advice from his conduct when he gets to Trinidad to training techniques, to staying in touch with family and friends back home.  He also admonished those present to stay in touch with Adrian as sometimes training stints like those can get rather lonely.

He compared Williams’ exploits to those of Elquemedo Willet and Kim Collins and opined that once he stays focused there were many more good things for him to achieve. He also advised Williams to seek out some course of study while he was training in Trinidad.

Williams, who is normally a man of few words was very eloquent on the day. He thanked all those who had made the trip possible and had special thanks for his Mom and personal coach, Denzil Parris.  He also had some advice for other young persons on Nevis as he advised them to stay away from drugs and gangs and other such vices.  He promised that he would do his best to make his family and his country proud.

Special mention was also made of Carl Claxton of Reliable Motors who has ensured that the gym expenses of the young athlete are taken care of.

Williams left Nevis by ferry late Monday afternoon and is expected to fly out of St. Kitts sometime today en route to Trinidad.