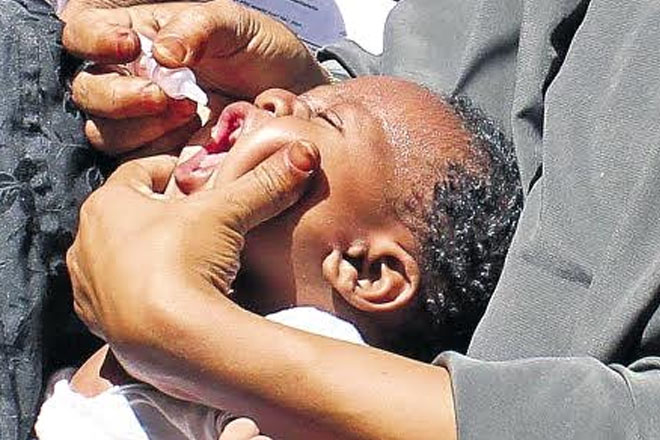 Mogadishu, Somalia (AFP) — Africa has marked one year since the last case of recorded polio, with the United Nations celebrating Wednesday a key step towards eradicating the disease.

The last recorded case on the continent was in Somalia on August 11, 2014, although health officials must wait two more years before declaring the continent free from the highly infectious, crippling virus.

The UN children’s agency UNICEF, which plays a key role in polio vaccinations, called it an “extraordinary achievement” but warned it was “not an end point”.

Success depends on the continuation of vaccination campaigns and close monitoring of possible cases, it said.

“We have had no new cases for a year despite all the challenges in the country,” UNICEF’s chief for Somalia Steven Lauwerier told AFP on Wednesday.

“We never want to see another Somali child being paralysed by this preventable virus. That means we need to continue to support the vaccination campaigns to ensure polio is completely eradicated.”

Nigeria marked one year since its last recorded case of polio in July. It is one of only three countries — along with Pakistan and Afghanistan — where the virus remains endemic.

“Globally, we are on the verge of totally eradicating a disease for only the second time in history,” UNICEF polio Chief Peter Crowley said, referring to the elimination of smallpox.

The rollback of polio is “a powerful symbol of the progress that has been made on the African continent over the past generation,” Crowley said.

A polio-free Africa would leave only Pakistan and Afghanistan where the disease had not been wiped out, according to the World Health Organization (WHO), which said the one-year mark was a key signal of the “important progress toward eradication”.

However, it has also warned there may have been cases that had gone unrecorded in Africa.

Polio is easily prevented through a vaccine, but there is no cure. Transmitted from person-to-person, often through faeces, it mainly affects children under five.

Initial symptoms can include fever and pains in the limbs, and can lead to permanent paralysis.

“With Africa now on track, we are left with only two countries where polio transmission has never been interrupted: Pakistan and Afghanistan,” Crowley added.

“Here too, despite enormous challenges, communities, governments and partners are working with courage and determination to end polio once and for all.”