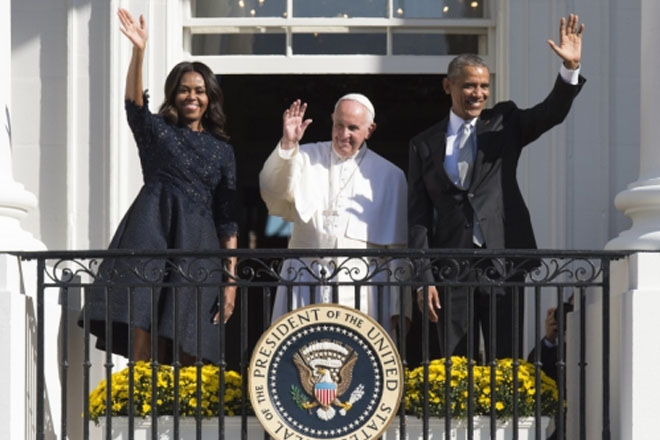 Washington, United States (AFP) — After bonding with US President Barack Obama on progressive themes like climate change, Pope Francis on Thursday addresses Congress, where conservatives embrace his moral authority but are less comfortable with the pontiff’s more political preachings.

On Wednesday, his first full day in the United States, Francis was greeted with pomp and ceremony at the White House, and then crisscrossed Washington to huddle with bishops, greet ecstatic well-wishers, conduct mass and elevate a Franciscan friar to sainthood.

Following his 40-minute speech, Francis will emerge on a balcony overlooking the Capitol’s west front lawn, where several thousand people were already gathered at daybreak as part of an expected crowd of some 50,000.

Republican lawmakers favour Francis’s opposition to gay marriage and abortion, while Democrats are elated at the prospect of his backing on progressive issues including immigration and the fight against economic inequality.

But House Speaker John Boehner said he expects the pontiff to rise above US political bickering and provide bipartisan inspiration.

“The pope transcends all of this. He appeals to our better angels and brings us back to our daily obligations,” Boehner said Wednesday.

“The best thing we can all do is listen, open our hearts to his message and reflect on his example.”

Some 30 per cent of US lawmakers are Catholic, while nine in 10 are Christian, and the pope is widely admired by Republicans and Democrats alike.