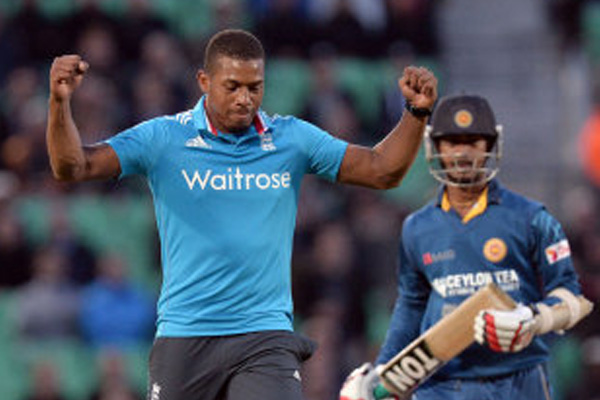 All-round Jordan brings a smile back to England

(Sports Page)— For Sri Lanka, this was a one-day international that will not live long in the memory, a match ruined by rain. But that is only half the story. For England, it was much more than that. It was a match worth remembering: a match that uplifted spirits, created smiles and brought hopes that after a tormented tour of Australia all was not lost. And it was a match that insisted, not for the first time, that England had a new entertainer in their midst.

England won not just because of the rain – although the second interruption, during Sri Lanka’s innings, came along at a convenient time – but because of Chris Jordan. His unbeaten 38 from 13 balls at the end of England’s innings swung the game in England’s favour. His three wickets confirmed that Sri Lanka would not remedy what had become an impossible situation. His fielding was pretty spritely, too.

Several rain interruptions wrecked the game – just utter the words Duckworth-Lewis and people lose interest, the only thing worth analyzing being the bottom of a warm pint of beer – but Jordan made a celebration of it all the same.

With all the talk of a new start in place, with a new coach, Peter Moores, talking of encouraging individuality, Jordan was just what England needed: a blithe spirit. He ran riot in the closing overs and much later after another stoppage he browbeat Sri Lanka with three wickets. England, living off his positive mood, felt powerful again.

Jordan’s ebullience has made him one of the most appealing faces in England’s new order. Sixty runs spilled from the last four overs as he smashed an unbeaten 38 from 13 balls, finishing with a length-ball six over long on against Lasith Malinga and a meaningful tuck of bat under arm, job done. As many as 93 came from the last seven overs. Malinga, so often England’s tormentor, had never conceded as many against them in an ODI: 71 from eight wicketless overs.

Sri Lanka’s chase of what started as 259 in 39 overs – before that became something else – foundered from the outset. Lahiru Thirimanne, back as opener after Sri Lanka dropped Kusal Perera to find room for Dinesh Chandimal, fell lbw for nought to an inswinger from James Anderson in the first over; Kumar Sangakkara was not the first to work out the cranky bowling style of England’s left-armer Harry Gurney and dragged on.

Then came the rain; then came Jordan. Three balls after the resumption, Tillakaratne Dilshan flung the bat at a wide one and perished to a neat catch by Gurney at third man. Chandimal and Kulasekara, promoted in desperation, both followed to catches at the wicket.

There was a big wicket, too, for James Tredwell, so bereft of first-class form for the past year that he has been left out by Kent, but shrewd enough to sneak out Mahela Jayawardene at midwicket. He, too, finished with three wickets, but without the same pzazz. Such is his lot. “Poor effort by the whole team,” said Angelo Mathews, Sri Lanka’s captain.

Three wickets for Sachithra Senanayake, an offspinner with the additional sleight of hand rarely seen in the English game, had kept England in check until Jordan took charger. His variations were subtle, but certainly effective as he dismissed Eoin Morgan, Gary Ballance and Ravi Bopara to record 3 for 30, his best return in 30 ODIs.

Ballance acquitted himself well at No. 3 with a punchy 64 from 72 balls, surviving the rain interruption midway through his innings. He is not the most elegant batsman in the world, but his impressive first-class form has suggested a good business brain and he exhibited that here.

Ian Bell’s orderly half century brought tranquillity and a sense of organization to England’s top order in the first of these five ODIs. He was dismissed to the last ball before rain intervened for the first time. Deceived by Mathews’ slower ball, he helped it to Malinga at short fine leg. He had survived a Sri Lankan review earlier in Mathews’ over: Mathews’ lbw decision refused both by umpire Rob Bailey and the TV adjudicator.

Bell, whose most authoritative blow was an easeful straight six in Thisara Perera’s first over, was again the emollient figure at the heart of this England side: England’s favourite moisturizer to help them through a dry, sore phase in their history. Alastair Cook’s form needs more moisturizer than most: his awkward stay ended when he edged a wide one from Kulasekera to the wicketkeeper, Sangakkara and he was also dropped on 1 in Kulasekera’s first over, a tough chance to Dilshan, diving high to his right at backward point.

Morgan was promoted to No. 4 after the skies cleared, but he fell third ball to Senanayake, chopping on a ball flicked out of the front of the hand. Ballance holed out at deep midwicket and Ravi Bopara, who was playing despite dislocating a finger just before the toss, fell lbw sweeping.

A jaunty contribution from Joe Root, England thought, might only bring 225. At the end of the game, the discussion might be of Senanayake and of England’s frailties against unconventional spin. A lusty burst of rain, and an even lustier bout of hitting by Jordan soon put paid to that notion.