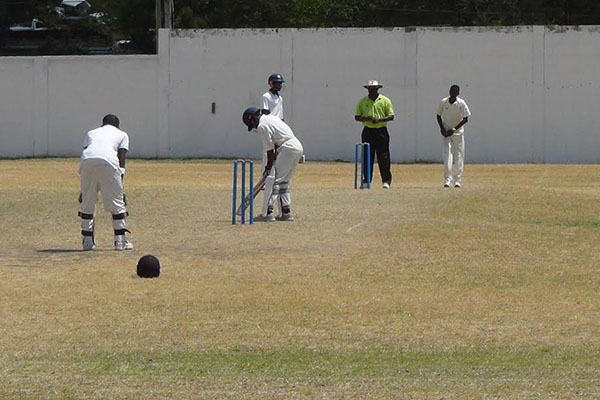 Captain of the Nevis under 15 team, Marcus Dubbery had an amazing game at the ET Willet Park on Tuesday 15th April.  This as the Leeward Islands under 15 tournament continued with the home team Nevis engaging neighbours Montserrat.

The match was eventually reduced from 50 to 35 overs per team.

The Montserrat team won the toss and sent the Nevis team in and was off to a great start with Chimnay Gopal bagging an early hat trick to run riot in the top order of the home team.

However, captain Duberry batting at number three, steadied the rocking ship and batted through the entire innings to be unbeaten at the end with a well played half century.

Nevis despite the poor start, managed a competitive 152 all out in 34 overs. Shockingly, only one other batsman got into double figures and that was Kyan Powell who slammed a crucial 18, batting at number 11.

The Montserrat team however, seemed on course for an early victory when they were coasting along nicely on 86 for 3 in just 17 overs.

That’s when captain Duberry introduced himself into the attack with his off spinners and suddenly, the game changed on its head.

An incident during the previous over may have been a sign of things to come.  The bowler from the Bath Hotel end, Adeejuan Jones, pitched through a faster delivery which not only surprised the batsman but also left the wicket keeper flat footed, without even getting a glove on the ball.

In his very first over, the young Montserratian batsman drove fiercely back at the bowler and Dubbery pulled off an astonishing caught and bowled effort.

From thereon, the opposing team struggled and wickets fell at regular intervals.  Montserrat eventually succumbing at 144 all out in 27.1 overs.

The umpires were Carl Tuckett and Rohan Isles