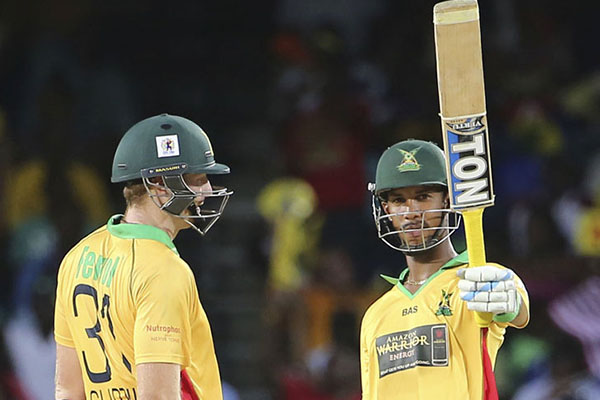 Amazon Warriors’ victory was the first instance of a team winning with a ten-wicket margin in the CPL.

ESPNcricinfo staff reports that Martin Guptill and Lendl Simmons took less than 15 overs to overhaul a target of 135. The pair got off to a quiet start – the first four overs yielded only 21 runs – but rapidly caught up with the scoring rate within the next few overs. The match slipped away from the Tallawahs between the fifth and 11th overs when Guptill and Simmons smashed 84 runs, bringing the equation down to a comfortable 30 off nine overs.

The unbroken 138-run stand was the third century-opening partnership between the two batsmen in this season of the CPL. Earlier in the tournament, the pair had added 103 against Barbados Tridents and a CPL record stand of 154 against St Lucia Zouks. Simmons was unbeaten on 71 off 43 balls with seven fours and three sixes, while Guptill’s 46-ball 66 – his fifth half-century of the tournament – had six fours and two sixes. Simmons’ knock kept him on top of the run-scoring chart, with 426 runs in 10 innings so far at a strike rate of 133.12.

Earlier, the Tallawahs innings suffered from a lack of momentum as the middle order failed to capitalise on the start given by openers Chris Gayle and Chadwick Walton. The pair added 55 runs but fell in successive overs at the half-way mark. Andre Russell and Nkrumah Bonner added a quick 35 runs but their dismissals off successive balls in the 18th over meant that the innings lacked big runs at the end.

Amazon Warriors will now play Tridents in the final on August 16.