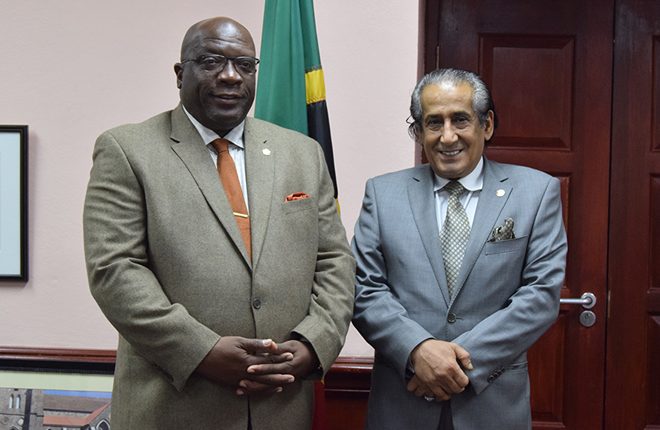 The Federation of St. Kitts and Nevis and the State of Qatar are in the process of finalizing formal diplomatic relations between both countries.

Ambassador Al-Sahouti is in St. Kitts and Nevis where he was expected to participate in the country’s Independence celebration activities, including the Independence Day Parade ceremony and Toast to the Nation, which were scheduled for Tuesday, September 19, but which had to be postponed due the impending Hurricane Maria.

Prime Minister Harris thanked the Qatari Ambassador for visiting St. Kitts and Nevis at this time, adding that his Government looks forward to broadening bilateral relations with Qatar.

“We appreciate the opportunity of extending formally our diplomatic relationships with your country. Qatar is a very important country on the Gulf and Middle East region and you have been quite a very successful country over the years in many areas of economic life, social life etc., and I know that you have many things which you can share with us and help us as we pursue our path of development,” Prime Minister Harris stated.

Dr. Harris extended an invitation to Ambassador Al-Sahouti to return to St. Kitts and Nevis for the official Independence Day Parade, once that event has been rescheduled.

H.E. Khamis Al-Sahouti first joined Qatar’s Ministry of Foreign Affairs in 1984. He was appointed as Qatar’s Ambassador to the Dominican Republic in November 2013, and non-resident Ambassador of the Republic of Haiti in October 2014.