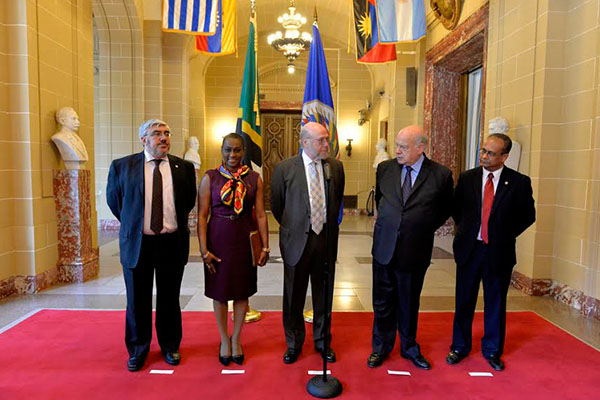 Basseterre, St. Kitts (CUOPM) – The Permanent Representative of St. Kitts and Nevis to the Organization of American States (OAS), Her Excellency Jacinth Henry-Martin, has assumed the Chair of the Permanent Council of the hemispheric institution, held during the past period by the Dominican Republic.

Upon receiving the gavel that represents the Council’s authority from her predecessor, the Dominican Ambassador Pedro Vergés, Ambassador Henry-Martin said it was an “honor” for her country to represent the Organization “at a time of critical introspection with a view towards re-energizing for maximum efficiency.”

The diplomat reaffirmed her country’s support for the defense of “all of the values” of the OAS.

“As Chair,” said Ambassador Henry-Martin, “I can guarantee my availability and my commitment to working with you to ensure that the work of this Organization is executed with efficiency.”

For his part, Ambassador Vergés, who chaired the Council during the previous period, expressed confidence that the new Chair of the Council will do “an outstanding job,” representing both her country and the Organization.

The Dominican diplomat concluded by wishing the new Chair “the best of luck and every success, convinced that she will have both the one and the other.”