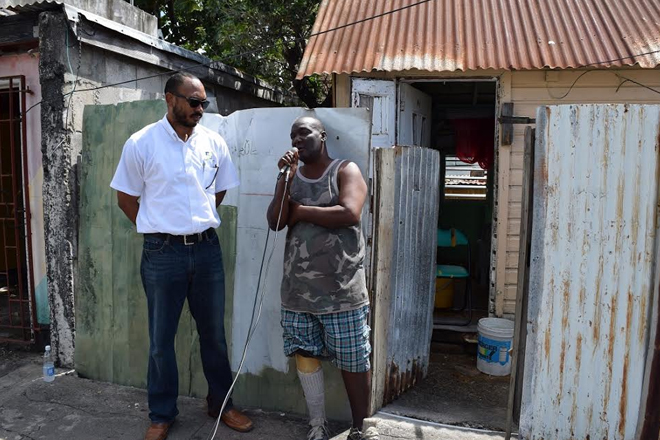 (SKNIS): Ambassador Jonel Powell, has been working tirelessly to ensure that the standard of living in Constituency #2 is raised. One such example was visible on Friday March 18, 2016, when the Ambassador provided assistance to one of the most deserving residents in Central Basseterre.

Mr. Anthony Chubby Williams has been a resident of lower Shaw Avenue for 26 year and did not have to access to running water in his home.

During a brief ceremony to signal the start of the construction of bath room facilities in the home of Mr. Williams, Ambassador Powell said, “Despite living a few yards from a stand pipe, he has found it difficult to access water as he is physically disabled.”

Ambassador Powell explained that he had given a commitment to make changes in the community during the election campaign, but that not been successful at the polls does not negate the responsibility he feels towards the residents who live in Constituency #2.

“I still thought that it was important to follow through and to ensure that the changes that I really want to see for my community are actually made,” said the ambassador asserting, “You don’t have to be in government to do that.”

He thanked the Minister of Public Utilities, the Honourable Ian Patches Liburd, for his assistance in ensuring that Mr. Williams has access to water and explained that work will be undertaken in two phases. The first phase is to provide running water for the resident and the final phase will see the construction of shower and toilet facilities.

Ambassador Powell said this project is the first of many as there are many persons within the constituency who are in need of assistance noting, “There is still much work to be done. My team and I will be assisting some persons in things as simple as getting front doors. Some people don’t have that. There is one other constituent who is in dire need of getting steps to get up to her house so that is probably the next project we are going to work on.”

He said he was proud to be making a difference in the lives of many people.

Expressing gratitude to Ambassador Powel, Mr. Williams said, “I am thankful for the assistance that I am getting from Unity.” He further stated that he had been asking for assistance for a long time.