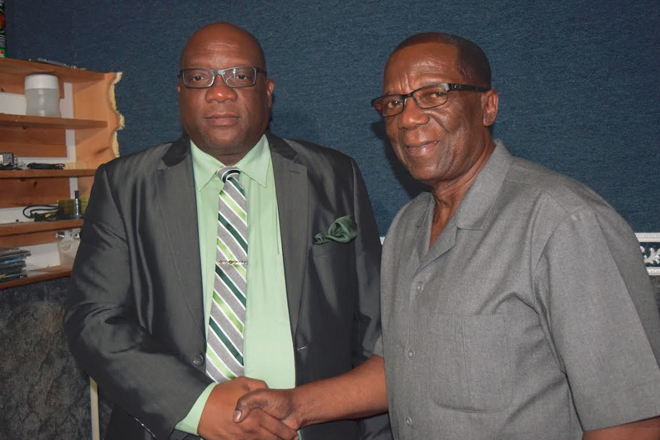 Ambassador Michael Powell: I have never seen a government bring so much relief to so many people in such a short space of time

(PRESS SEC) – His Excellency Ambassador Michael Powell, Special Envoy in the Office of the Prime Minister of St. Kitts and Nevis, relaunched his immensely popular radio programme The People’s Voice on Sugar City 90.3 FM today, Monday, August 22nd, 2016, at 9:00am after a hiatus of approximately four months.

Prime Minister Dr. the Honourable Timothy Harris was Ambassador Michael Powell’s special guest this morning and, if you happened to miss the broadcast, you can hear the rebroadcast tonight from 8:00pm to 9:00pm.

“To God be the glory, you are now back on air and back on air to stay and I want – on behalf of all those people who had looked forward to your voice, to your message, to hear the truth being told – to thank you for coming back on air to be part of the voice of prosperity, the voices of the people,” the Prime Minister said, adding that the Team Unity Movement – which was officially launched on Thursday, September 26th, 2013 at Greenlands Park with him as its leader – originated from the voices of ordinary people and stays true to that spirit today.

“Team Unity is an idea that will never die,” Prime Minister Harris said on The People’s Voice. “Team Unity represents a vision for developing a small island state, maximizing the resources available to a small country across the partisan divide and, in the context of our Federation, across the island divide of Nevis and St. Kitts. That idea was one that caught the attention of the people of St. Kitts and Nevis way back before 2013, in fact, when persons like Washington Archibald, like ‘Mr. Culture’ [Vincent Robelto Benjamin], like ‘Mr. Politics’ [Wendell Dorsett], and ‘Jam Down’ [Elvis Manners] and others had said to the country that we need a new vision and a new way that would bring a more cohesive country and put the country to work,” the Prime Minister added.

The Team Unity leader continued: “Team Unity as a government of St. Kitts and Nevis is stronger than ever and cohesively working to fulfill the mandate of the ordinary people…Our message resonated and Team Unity is alive and well, stronger than ever. We are still here and we are working on behalf of the people.”

“Mr. Prime Minister, this is the sort of good news that the people out there are looking for,” Ambassador Michael Powell said, adding that, “Quite frankly, as you know, I was in a government before and so I speak from experience…I have never seen a government bring so much relief to so many people in such a short space of time.”

Ambassador Michael Powell then commended Prime Minister Harris and his Team Unity Government for providing the people with immeasurable relief when Value Added Tax (VAT) was removed from food, medicines and funeral expenses, effective April 7th, 2015. The previous government was infamously responsible for the highest introductory rate of Value Added Tax (VAT) in the Caribbean, at 17%, which was implemented on November 1st, 2010.

It was no surprise then that – just 13 months after the removal of VAT from food, medicines and funeral expenses by the Team Unity Government – the International Monetary Fund (IMF), in its May 13th, 2016 press release about St. Kitts and Nevis, said that “strong retail activity also supported growth” and “inflation turned negative, owing to the impact of VAT and import duty exemptions and lower commodity prices.”

In a nutshell, St. Kitts and Nevis is experiencing a lower cost of living, which has led to increased consumer spending.

This strong retail activity is reflected in S. L. Horsford & Co. Ltd.’s Annual Report for 2015, which reported the highest sales in the history of the company. Imagine that just three years earlier, Mr. W. Anthony Kelsick in his S. L. Horsford & Co. Ltd.’s Chairman’s Report for 2012 reported that: “The economy, already in decline for the past 5 years, continued its decline even further in 2012. The result of this, along with the effects of VAT and increased electricity costs, caused further contraction on the ability of the residents of St. Kitts and Nevis to spend.”

After having expressed his disappointment in 2012, S. L. Horsford & Co. Ltd.’s Chairman notes in his Report for 2015 – with a hint of pride – that, “During 2015 extensive renovations were done to both furniture store locations in St. Kitts…No decline in sales of furniture and appliances was experienced in spite of the disruptions caused by these renovation activities.”

Similarly, the TDC Group’s 2016 Annual Report states that, in December 2015, the highest monthly sales were recorded since the introduction of the Toyota brand in the Federation of St. Kitts and Nevis.

Also reflecting the strong retail activity is the fact that the Eastern Caribbean Central Bank says that gross domestic product (GDP) growth in St. Kitts and Nevis as at December 2015 was 6.64% compared to only 2.62% in the Eastern Caribbean Currency Union. In the United States, for instance, consumer spending makes up 70% of GDP. So it appears that the Team Unity Administration’s focus so far on the bread and butter issues is paying off, with the dividends being more purchasing power and growth in the economy.

Ambassador Michael Powell gave his listening audience and his special guest, Prime Minister Harris, a couple of anecdotes that speak to this: “This is money that is going back into people’s pockets day after day. As a woman said to me, ‘All of us are eating VAT-free now.’…I remember one lady in the supermarket, who saw me, hugged me and introduced me to her husband. She said, ‘Mr. Powell, look here, once upon a time we used to have a little blue basket in our hands. Now, we have a push [shopping] cart.’”